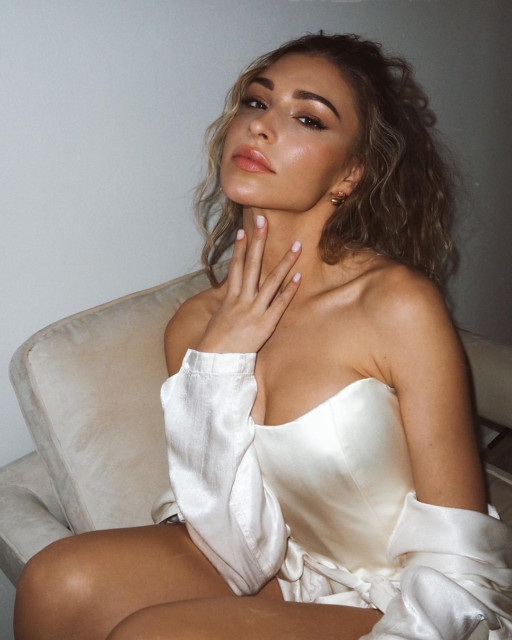 ZARA McDermott sizzled in a sexy silk gown as she posed for a stunning photoshoot.

The Love Island star, 24, turned up the heat in the latest pictures, which see her striking a pose on a velvet chair.

The first picture shows Zara sitting down with her legs poking through her silk dress.

In the next, it zooms in as Zara trails a hand down her neck, with the other giving her best look at the camera as her hands sit on her face.

In the last, Zara is holding her chest, with the gown coming down from her shoulders.

She posed up a storm from her velvet chair The star modelled for a new photoshoot

Fans went crazy for the pictures, with one person saying: “Wow u beautiful princess”

A third remarked: “Wow so gorgeous

While some have described her beauty as otherworldly, Zara revealed she has real experience with the supernatural – as her boyfriend Sam Thompson’s house is haunted.

The star said the pair have been woken up at 4am each morning by a series of creepy events, including the TV and lights turning on mysteriously. The eerie incidents started over a year ago after Sam purchased an expensive piece of art for their bedroom.

Zara took to social media to explain the spooky goings-on, writing: “Okay so loads of you want to hear this ghost story….it’s very interesting.

“So it all started just over a year ago. I came home one day and Sam had gone and bought THIS picture.

“I looked at it and was like wtf is that. Sam told me it was an expensive collector’s piece of art and was almost offended that I didn’t like it. But I was like I don’t care how much it is, that is NOT going above the bed. She revealed Sam’s house is haunted

“First of all, we had it resting against the wall as we were waiting for someone to come put it up for us.”

The Love Island star then shared a lengthy Instagram story explaining the a “spirit” has been living in the house with the couple.

She wrote: “It started at just after midnight that same night. We heard loads of weird noises coming from what seemed like downstairs.

“Sam went to investigate and found nothing downstairs. Then I thought maybe Louise was in trouble, I had visions of her accidentally falling over or something or hurting herself and thought maybe she’s trying to call for help. The tattoo she got for Sam

“Ryan [Louise’s boyfriend] was away that night and she was on her own. I was so worried and Sam went to check on her. She was absolutely fine and hadn’t heard anything.”

The TV babe recalled the most horrifying night of her life, she said: “I think the creepiest night was when we woke up at 4.45am because the trailer for Evil Genius on Netflix was playing over and over on loop. No sound. But we were woken up by the brightness.

“By the way, that’s not something that can be done by accident. You physically have to click onto Netflix on the TV, scroll and find Evil Genius (which we had never watched before on that account so wasn’t at the top) and then click play trailer. It was playing full screen too.”

From Megxit to Frogmore Cottage refurbishment, the stories Meghan and Harry wanted to keep...

Love Island’s Demi Jones asks fans to send her nudes while sitting in a...

Labour conference opens with National Anthem for the first time EVER as emotional Keir...