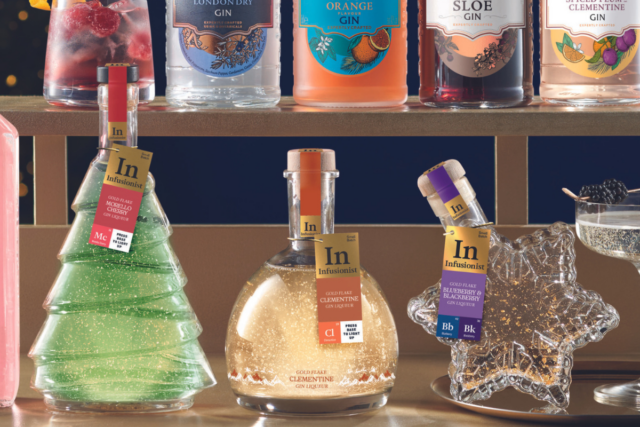 ALDI ‘s popular glitter gins are back for Christmas – but with a difference.

Shoppers might spot a change to the drinks which are always a hit over the festive season.

This year Aldi has revealed three new bottle designs, two of which light up, each with a flurry of 23-carat gold flakes.

The Aldi Infusionist Gold Flake light-up gin liqueurs are set to be released in store just in time for the Christmas party season from November 7.

The collection features a brand new flavour of morello cherry – and it’s in a new bottle shaped like a Christmas tree.

A second new design is a festive snowflake shaped bottle which stands on two points.

Making a come back is the clementine flavour, with flavours of peach and elderflower – which now comes in a rounded bottle.

All the bottles are £13.99 for 50cl, apart from the clementine flavour which is 70cl. The Tree and round bottles both light up.

Last year the supermarket made headlines when it went bottle-to-bottle against Marks & Spencer by launching its own glitter globe gin liqueurs for £6 cheaper.

Aldi is famous for launching “copycat” products at cheaper prices.

M&S responded by launching legal action against the discount chain claiming that customers could mistake Aldi Infusionist Glitter Globe Gin Liqueurs for its own.

Aldi said the change in bottle designs was not in response to the case.

An Aldi spokesperson said: “Our Infusionist Gold Flake Gin Liqueurs are very popular and, this year, we’ve developed a new-shaped bottle for our popular clementine gin and expanded the range with two new additions in our snowflake and Christmas tree bottles.”

M&S announced its Christmas menu in late September and last week saw the return of their own Light up Snow Globe Gin Liqueurs.

The posh shop has even reduced the price of its bottles and you can pick up the tipple for just £15 for a 70cl bottle this year.

This is a £5 drop from last year when each bottle was sold at £20. There are two flavours this year: clementine and spiced sugar plum.

The gin dispute, is not the first time the two supermarkets have come to blows in court.

Aldi took the cake off shelves but it returned shortly after – with a different face.

Following on from Tesco and M&S’s earlier releases of their Christmas menus, Asda also revealed theirs this week.

HOAR has even been out trying some of the products to let you know our recommendations this festive season.

Did you miss our previous article…
https://hellofaread.com/money/jeremy-hunt-says-he-faces-very-difficult-decisions-on-spending-and-tax-as-new-chancellor-suggests-another-u-turn/

Meghan ‘will only come to UK if she can bring Netflix cameras’ as she...

Boris Johnson reveals 50-page lockdown plan from schools to work – but we have...

I’m furious after our brand new £2k sofa arrived with a part completely the...

How old is Katie McGlynn who is she dating?