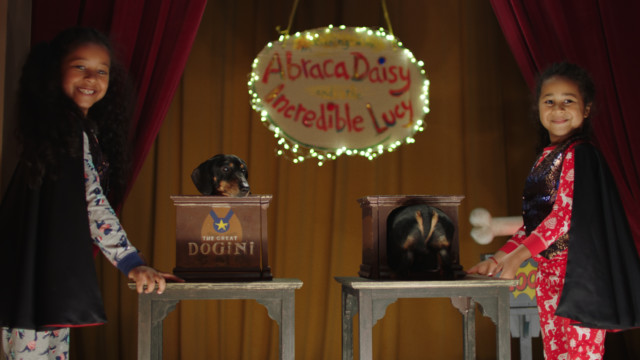 THE first Christmas advert of the year has landed – and it’s Argos one about festive magic with Gary Barlow’s new single as the soundtrack.

The ad features two sisters, Lucy and Daisy, putting on a festive themed performance in front of their proud family.

Argos’ Christmas ad for 2020 features two sisters, Lucy and Daisy, putting on a magical performance in front of their family

The story starts with the girls circling a magic trick set in the Argos Christmas gift guide, which has been renamed “The Book of Dreams”.

Shortly after, the girls transform into mini magicians and they begin to perform tricks.

The performance includes a dachshund and sees the audience pause for breath before the girls successfully complete the trick, to everyone’s cheer.

As the tricks get bigger, Lucy and Daisy dream bigger and more and more family members come to enjoy the show with them. The ad stars with the girls circling a magic trick set in the Argos Christmas gift guide, renamed “The Book of Dreams” The audience is thrilled about the girls’ magical tricks

The living room is eventually transformed into a grand theatre where the girls receive a standing ovation, and the “Book of Dreams” appear once more.

The advert airs for the first time tonight – Sunday November 1 – during ITV’s Family Fortunes at 8pm.

But you can watch the advert here before it goes out on telly this evening. As the magic act reaches its peak, the living room is transformed into a grand theatre

Argos said it’s created the ad to show how a simple gift can make a special memory, especially after what has been a challenging year for many.

The retailer first featured its famous catalogue in last year’s Christmas ad, where it was also renamed “The Book of Dreams”

The ad showed a dad and daughter performing at a once in a lifetime gig after picking out a drumkit from the catalogue.

The most hotly anticipated advert of the year – John Lewis – usually drops in the first two weeks of November.

In the true spirit of Christmas, the retail giant is using its festive campaign this year to help raise £5million for struggling families.

Millions on legacy benefits given fresh hope over payout that could be worth £1,500

I’m a single mum-of-two with cancer and rising costs mean I have to work three jobs, my body is broken

Boris Johnson hints roadmap could be delayed saying he’s ‘ruling NOTHING out’ amid Indian...

BGT complaints climb to 1,000 as more viewers complain to Ofcom about Amanda Holden’s...