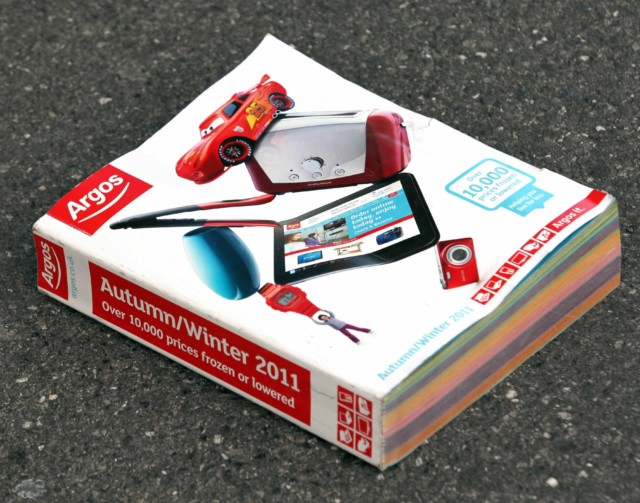 The retailer, which specialises in homeware, electronics and toys,  is “bidding a fond farewell” to the book as shoppers increasingly turn online.

Argos is scrapping its famous catalogue after almost 50 years

In an email to staff, Simon Roberts, chief executive of Argos’ parent company Sainsbury’s, said: “As most customers are now browsing and ordering online, we have decided that the time is right to stop printing the Argos catalogue.

“Removing the printed catalogue helps us to flex our range and offers and to be more competitive on price.”

The catalogue was first launched in 1973 and has been running for 47 years.

Two editions are printed each year for customers to take home or to browse in stores, and celebs including Holly Willoughby, Emma Willis and Tess Daly all made appearances in the catalogue in the early 2000s. In total, there have been 93 editions and over 1billion copies printed.

While Argos adds that its separate Christmas gift guide will also continue to be printed.

The catalogue’s demise has long been coming, with Argos reportedly scrapping it in some stores back in 2017. It features everything Argos sells, alongside a description and a price – this picture shows TVs being sold back in the 1980’s Most Argos branches have now gone digital with customers using iPads to browse items in stock.

Mark Given, chief marketing officer at Sainsbury’s, said: “Just as our customers’ tastes have changed over the years, so have their shopping habits.

“We’re seeing an increasing shift towards digital shopping, using our mobile app, website and in-store browsers. Closing the book on the catalogue will help us focus on delivering exciting and inspiring digital shopping experiences to meet the changing needs of our customers, both in-store and online.”

High street retailers have had a tough time of it of late, and Argos closed its 700 standalone stores when Boris Johnson told non-essential retailers and services to close from March 23 due to the coronavirus crisis.

It did, however, keep Argos concessions within Sainsbury’s supermarkets open during lockdown for the collection of online orders.

The controversial decision led to fury from workers who said the firm was “putting their health at risk” to sell paddling pools, sand bags and BBQs.

When is it too cold to go to work or school and what temperature will I be sent home?