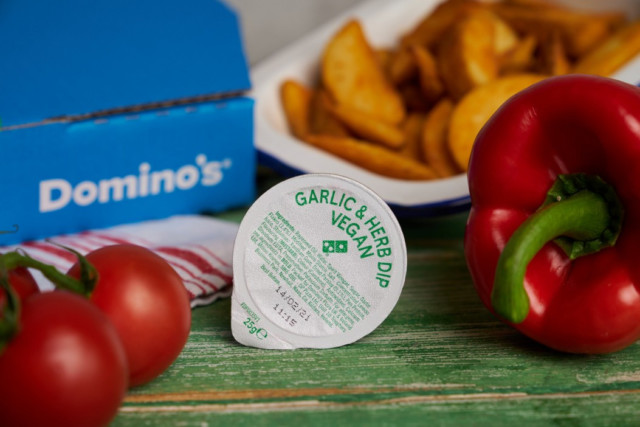 The pizza chain has followed Pizza Express and Pizza Hut by adding vegan options to its menu.

Until now, vegans could only have Domino’s wedges and either barbecue sauce or Frank’s Red Hot sauce from the pizza chain’s menu as their pizza bases contain milk.

But now the chain has two vegan pizza options available at all of its UK branches, as well as a vegan garlic and herb sauce.

We’ve rounded up all the different menu options that are vegan on Domino’s menu and have listed them below.

Like the original cheese and tomato pizza, Domino’s vegan alternative contains tomato sauce and cheese on top, but it contains vegan ingredients.

The dough is vegan, as is the tomato sauce, and so is the cheese.

The cheese has been made with coconut milk to give it a creamy and cheese-like consistency, while dried yeast has been added to bring the cheesy flavour.

It has has 169 calories per slice and only comes in a medium size, which is 11.5 inches or the equivalent of eight slices.

The Vegan Vegi Supreme has 168 calories per slice for a medium pizza, which is also the only size it comes in.

Domino’s potato wedges are simply sprinkled with a mixture of different spices before being baked, so they’re vegan too.

One side serves two people and is 168 calories per serving (excluding dip).

But in honour of the new vegan pizzas, Domino’s has also launched a vegan version of its popular garlic and herb dip.

The normal garlic and herb dip contains both egg and milk products, which means it is unsuitable for vegans.

The new garlic and herb dip contains ingredients, such as pea protein, to give it a similar flavour and consistency as the normal dip.

The vegan dip costs 49p and one pot serves two people, meaning that it is 116 calories per serving.

Earlier this year, Wetherspoon added a vegan burger and Quorn nuggets to its menu.

Wagamama, McDonald’s and Gregg’s have also added more vegan-friendly options to their menus this year.

We also taste tested vegan food products against the meat versions to see if there was a difference in taste.

Labour MP slammed for making “racist comments” about Kwasi Kwarteng – with calls for...

Prince Harry vowed to stop The Crown airing on Netflix before it covers his...

Queen Elizabeth news: Her Majesty was once called THIS quirky nickname by beloved late...