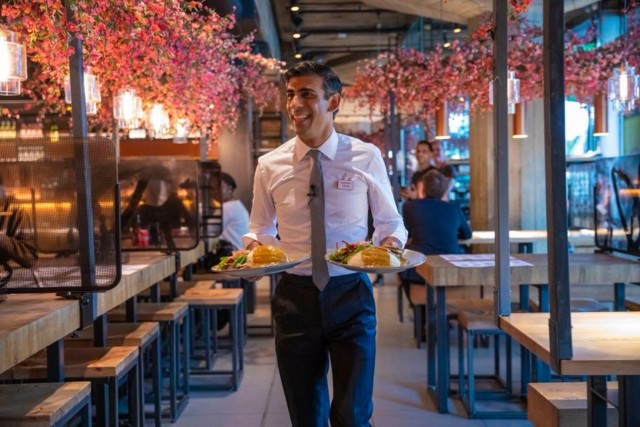 EAT Out to Help Out diners planning to head out on bank holiday Monday can use a postcode checker to find restaurants offering 50% off their bill.

The government scheme gives diners half-price meals and non-alcoholic drinks, up to £10 a head, in restaurants, cafes and pubs on Mondays, Tuesdays, Wednesdays throughout August.

The scheme launched on August 3 and runs until August 31, so there’s just one more day left to bag money off the bill.

Sadly, it doesn’t look like Eat Out to Help Out will be extended beyond August 31, although thousands have signed a petition asking it to run in September.

And the Federation of Small Businesses is also campaigning for the government to extend the scheme for another month.

But so far the government has remained steadfast that the scheme will not be continued after August.

A HM Treasury spokesperson told HOAR: “Part of this popularity is precisely because it is a time-limited scheme – this reminds and encourages people to safely return to going out.”

Some restaurants have, however, said they’ll run their own similar versions of the scheme for some or all of September. This includes Harvester, Pizza Hut, and Toby Carvery.

In the meantime, to make the most of the scheme’s official last day, you can use the government postcode checker that shows the pubs and restaurants offering Eat Out to Help Out in your area.

The Eat Out to Help Out restaurant finder is available on the Gov.uk website. The Eat Out to Help Out restaurant checker looks like this

To find places near you offering the discount, simply enter your postcode and the webpage will bring up local businesses.

Nearly 200 chain restaurants and larger cafes, hotels, and local councils have signed up to the scheme across the UK – and there will be smaller businesses and independent firms signed up too.

Businesses can choose whether or not to sign up, meaning the offer may not be available at your favourite local.

McDonald’s, KFC and Starbucks have also signed up.

When HOAR used the online checker today using one London postcode, we found 100 restaurants, cafes and pubs taking part in the local area.

We’ve got a list of other chains taking part in the deal in the box above.

In addition, you can also use an app to see what Eat Out to Help Out restaurants, pubs and cafes are near you.

This is separate to the postcode checker and isn’t run by the government. You may also want to check out an interactive map, which shows you which restaurants nearby are taking part.

In some cases, restaurants are offering Eat Out to Help Out on top of already lower prices because of a VAT cut.

VAT was slashed from 20 per cent to just 5 per cent for businesses in the tourism and hospitality industries – but not all places will pass on those savings to customers.

But if your chosen restaurant does choose to slash prices in line with VAT you could get some tasty savings.

For example, you can get a quarter of Peri Peri chicken from Nando’s for £1.85 in August thanks to a combination of lower VAT and Eat Out to Help Out.

Eat Out to Help Out was announced on July 8 by chancellor Rishi Sunak as part of his mini-Budget.

We’ve rounded up all the pubs and restaurant chains taking part.

Plus, here are the Eat Out to Help Out posters to look out for in restaurants to get 50% off.

Love Islands Natalia branded a game player as she flirts with Jamie to stay...

Dan Osborne arrives in Australia after nightmare journey to Im A Celebrity for showdown...

Tory MP caught without a mask on a train after telling constituents they MUST...