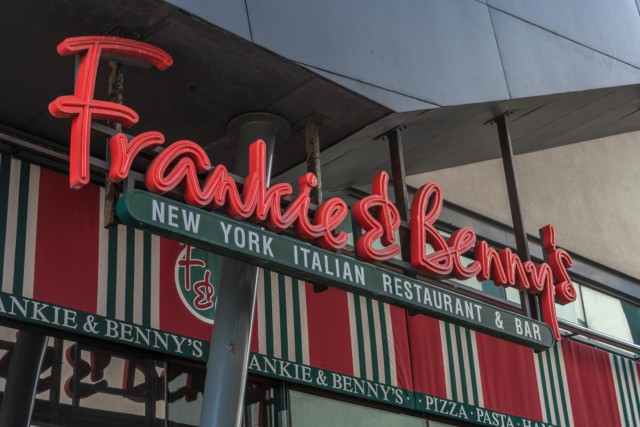 A “LARGE number” of Frankie & Benny’s restaurants will not reopen after lockdown as the chain struggles to stay afloat during the coronavirus crisis.
The owner of The Restaurant Group (TRG) dining chain will tell staff today that many sites are “no longer viable to trade and will remain closed permanently”, according to an email seen by the BBC.

The email adds: “The Covid-19 crisis has significantly impacted our ability to trade profitably, so we’ve taken the tough decision to close these restaurants now.”

There are 236 Frankie & Benny’s restaurants across the UK but it’s not clear how many sites will be affected by the permanent closures.

The BBC reports that the message was sent to managers in the group’s Leisure Division.

The leisure industry is arguably the worst hit during the coronavirus lockdown, and even as restrictions ease, it’s not clear when restaurants, pubs and cafes will be able to reopen for customers to dine in.

TRG is one of the largest restaurant operators in Britain and also owns chains including Wagamama and Garfunkel’s.

In March, it was forced to shut the majority of its Tex-Mex Chiquito outlets as well as its Food & Fuel chain of pubs in London after falling into administration.

It’s believed around 1,500 jobs were lost as a result.

TRG currently has around 22,000 staff members on furlough.

The closures will be the second round this year for Frankie & Benny’s which had already announced that 90 would shut down imminently back in February.

Many food chains were already struggling before the pandemic as diner opted to dine out at independent restaurants instead.

But the forced closures has mean that some are bringing forward plans to shut up some shops.

A partial sale has saved 30 branches but axed 1,000 jobs in the process of rescuing the brand.

While Pizza Express hasn’t confirmed any closures yet, it has been suggested that some of its 470 branches may not reopen after lockdown.

The Chinese-owned chain, which employs 14,000 people globally, has a debt of £1.1billion and it has asked debtors if it can delay its 2019 results.

The BBC reports that TRG doesn’t wish to add comment. Thousands of working parents can get £100 free cash to help with their food shop and energy bills – will you get help?

What is a general election and who can vote?