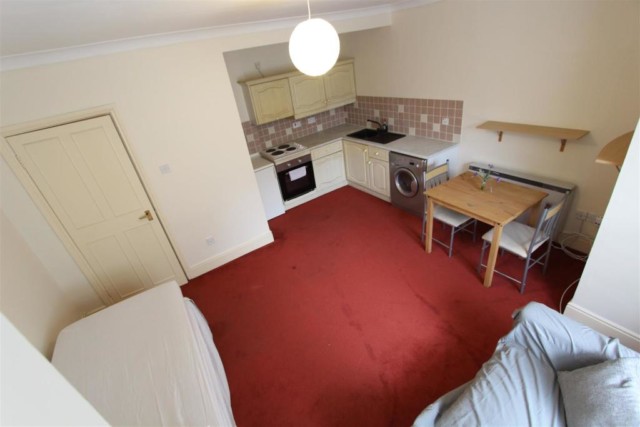 A TINY studio flat in a seaside town has gone on the market for £700 a month – but it might be worth the huge cost for one very good reason.

The property in Bournemouth, Dorset doesn’t offer much bang for the renter’s buck.

A tiny studio flat has gone on the market for £700 a month in Bournemouth – and, in spite of initial appearances, it’s sure to be snapped up soon

There are just two rooms inside. One features a single bed, two-seater sofa and small kitchen, while the second is a bathroom.

The living space is so small that it appears to be impossible to fully open the door without hitting the mattress.

However, there’s likely to be a long queue of people hoping to view the property, in spite of its drawbacks.

That’s because it boasts a whopping outdoor pool in the garden.

The pool, which is available to residents only, is heated – meaning keen swimmers can take a dip all year round.

Deckchairs have been placed on the flagstones around the spot, so neighbours can meet in the summer and enjoy their swim.

And the pool isn’t the only perk of taking on the flat.

Beach-lovers will be thrilled to know they’re only a ten-minute walk away from Bournemouth’s sandy shoreline.

In their ad, they describe the kitchen as “open plan” and say the white goods have been gifted by the owner.

The flat is available either furnished or unfurnished, and has electric heating, a “large communal garden” and permit parking for one vehicle, they add.

It’s not the only property with a surprise in store that’s currently on the market.

However, whoever buys a two-bed home in a picturesque Scots village for £15,000 will find something they definitely don’t want inside.

The detached property in Ayrshire was damaged by fire, and it’s left a huge hole in the two-storey pad’s roof.

Meanwhile, house-hunters were left scratching their heads after spotting a bizarre addition to a property in Carmarthenshire, Wales.

The home has a very strangely positioned radiator that appears to float in mid-air.

And a tiny London flat has hit the market for £960 a month – but it’s missing some very important features.

The mini property barely has room for a single bed, let alone a proper kitchen. Without the pool, the flat isn’t particularly special It offers just two rooms – the living space, which includes an ‘open plan’ kitchen, and the bathroom But as well as the pool, it’s just a short walk to Bournemouth’s stunning sandy beaches

Britain in Grand National race to beat Covid but could be in lockdown until...

Coronation Street’s Georgia May Foote wows fans as she strips to a towel for...