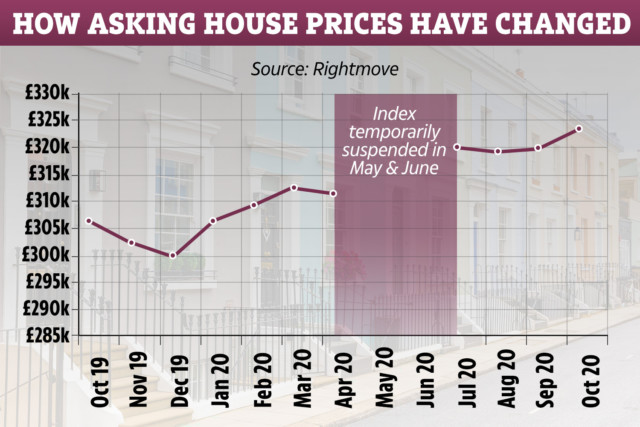 THE average price tag on a home hit a new record high of £323,530 in October, according to property website Rightmove.

Asking house prices rose by 1.1% compared to September, and are now 5.5% higher than a year ago.

The average house price hit a new record high of £323,530 in October, according to Zoopla

This marks the biggest rate of increase for more than four years, Rightmove said.

It’s positive news for sellers who can seize the opportunity to cash in, but buyers risk paying over the odds if the house price boom doesn’t last.

The price index by Righmove comes after house prices saw their biggest monthly rise in 16 years in August, according to Nationwide, and mortgage approvals reached their highest for 13 years.

House prices then rose again in September, up 0.9% on August and up 5% on the same month last year which was the biggest yearly rise since 2016.

Rightmove now predicts the annual rate of price growth could peak at around 7% before the end of this year.

Meanwhile, other experts believe the mini boom won’t last much longer, with some suggesting house prices could fall after October.

This is when the government’s furlough scheme is due to end, signalling an uncertain time for workers.

Hundreds of thousands of jobs are believed to be inline for redundancy once the financial support is pulled.

Currently, some sellers may also be getting too optimistic about what people will pay for their homes, according to Rightmove.

Tim Bannister, Rightmove’s director of property data, said: “Previous records are tumbling in this extraordinary market, and there are still some legs left in the upwards march of property prices.”

He added: “Many buyers seem willing to pay record prices for properties that fit their changed post-lockdown needs, though agents are commenting that some owners’ price expectations are now getting too optimistic.

“Not only is the time left to sell and legally complete before the March 31 stamp duty deadline being eaten away by the calendar, but more time is also needed because the sheer volume of sales is making it take longer for sales that have been agreed to complete the process.

“Sellers and their agents should therefore be wary of being too optimistic on their initial asking price, as whilst activity levels continue to amaze, there are some signs of momentum easing off from these unprecedented levels.”

Rightmove said that despite the effective market closure between late March and mid-May, 2% more sales have been agreed so far this year than in the same period in 2019.

The average time to sell a property is also at a new record of 50 days, which is 12 days faster than a year ago.

The number of active buyers contacting estate agents in September was 66% up on a year earlier, only marginally down on a peak of 67% higher in July.

Mr Bannister added: “With the number of buyers contacting agents still up by two-thirds on a year ago, there is plenty of fuel left in the tank to drive further activity in the run-up to Christmas and into next year.”

Meanwhile, Martin Robinson, director of estate agency Hunters, said: “We would normally see a slowing of the market as the nights draw in, but the appetite to take full advantage of the low interest rates and a stamp duty holiday means activity continues to grow.

“We’re also seeing changes in the habits of the consumer, with many saying that there is no need to be on the doorstep of their workplace and are looking to move to a more rural or affordable location.”

Looking to buy or sell a home? Check out our guide on what’s next for house prices.

Tier review: Millions more plunged into Tier 3 across England – but Bristol and...

Boris Johnson now wants to link Scotland and Northern Ireland by tunnel instead of...