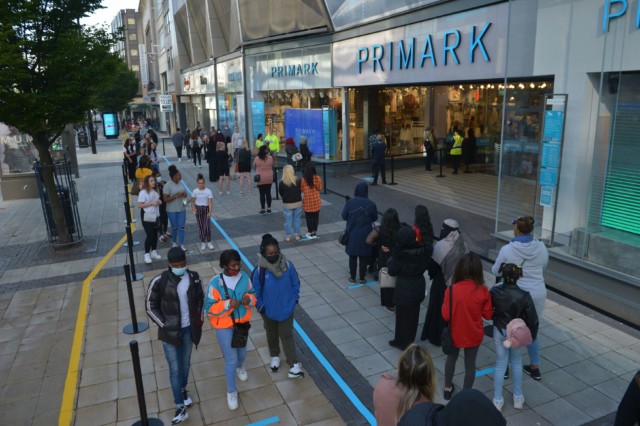 HUNDREDS of shoppers have been pictured queuing outside stores including Primark and Sports Direct this morning, with some customers camping overnight to be first through the doors.

Both retailers are among the dozens of big-name “non-essential” shops to reopen stores today as the high street finally kicks back into life following the coronavirus shutdown.

At its flagship store in Birmingham, Primark customers were seen queuing overnight to be front of the queue, forcing the store to open early to cope with demand.

The shop was due to open at 8am but ended up letting shoppers in 35 minutes early at 7.25am, according to Birmingham Live.

Primark is welcoming back customers today to 153 shops in England, almost three months after all “non-essential” retailers were forced to shut in March.

Similar queues have also been seen outside Sports Direct stores, with the retailer opening 374 outlets.

It comes as rival retailers including Debenhams, John Lewis and Zara have slashed up to 70 per cent off to entice shoppers to start spending – although Primark has previously said it won’t be launching special sales or flash discounts. Shoppers are being separated by queue markers on the pavement Primark will reopen its doors today after three months Primark has been closed in the UK since March One shopper was seen shopping in full PPE in Birmingham Shoppers outside a Primark store in Liverpool Primark is only reopening stores in England – there has been no date announced for when stores in Wales, Scotland and Northern Ireland will follow.

Changes customers can expect inside Primark stores include fewer tills, no testers and new contactless returns, according to our exclusive first look inside its Westfield White City store in London.

Shoppers will also be banned from trying on clothes and will be encouraged to use hand sanitiser stations before entering shops.

Primark closed all of its 189 UK branches on March 22 – you can use its locator tool to see if your nearest shop is now open again.

Brits have been tweeting about the queues in their high street this morning, with some criticising customers for not social distancing.

Tweets from Brits about their local Primark

One person posted: “Queue outside Primark in town started at 6am apparently, shop doesn’t open until 10.”

Another said: “I’ve literally just seen more people queue up for primark than a Beyoncé concert.”

A third tweeted: “If you go up Primark can you get me some socks, cute PJ set, jeans, nails, that good face powder and some of them nice facemasks. Queue is mental and I miss my 3 quid pamper sesh.”

Tweeting about the line of customers outside Niketown in Oxford Circus, London, one shopper said: “Good to see the queue observing social distancing as well. Not…” Customers have been criticised for not social distancing outside some shops Shoppers waiting to get inside Sports Direct in Southampton Three in five of the best-known stores are set to reopen today in a boost for our Bounce Back Britain campaign to help people, communities and businesses get back on their feet.

Other big-name brands that have started welcoming customers back include JD Sports, Sports Direct, H&M and Zara.

HOAR has rounded up a full list of retailers that you can now shop from.

Shops are desperate for a boost as customers return to the high street, with lockdown costing them £1.8billion a week according to new data from the British Retail Consortium.

It comes as Chancellor Rishi Sunak is believed to be considering a temporary VAT cut to get Britain spending once again.

The Times reports how the Treasury will make a decision once figures show if shoppers are spending again.

Prime Minister Boris Johnson confirmed all “non-essential” retailers would be allowed to reopen again on June 15 in an announcement on May 25.

Previously, only stores that were deemed “essential” were allowed to stay open during the Covid-19 lockdown – this included retailers who sell food and medicines, as well as some hardware shops.

Homeware shops were given the green light to reopen on May 20, while outdoor markets and car showrooms were able to reopen on June 1.

“Non-essential” stores were told to make their businesses “Covid-secure” before reopening.

This includes making sure the NHS has the capacity to provide critical care and specialist treatment, as well as ensuring there is a sustained and consistent fall in daily deaths. Brits show raw emotion as they finally get to pay respects to the Queen’s...

How old is Katie McGlynn who is she dating?

Nicola Sturgeon confirms Scottish pubs WILL open indoors 3 weeks ahead of England as...