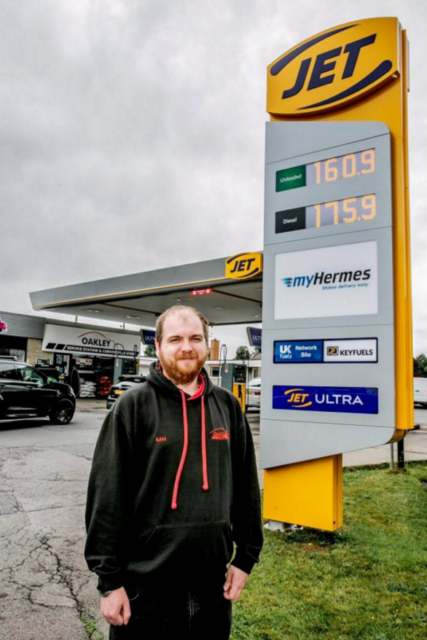 THE owner of a petrol station which is selling its fuel at rock bottom prices says he is doing it to give back to the community.

Drivers have been flocking from miles away to Jet Oakley petrol station in West Auckland, County Durham.

It is selling unleaded petrol for as cheap as 160p a litre and diesel for 175p a litre, reports LadBible.

Petrol prices have been tailing off in recent weeks after reaching record highs. But relatively, they are still more expensive than usual.

The AA reported petrol prices were at 175p last week with diesel at roughly 185p.

But manager at Jet Oakley Sam Barber, said it was in the petrol station’s “best interest” to keep prices down as it meant more people inside shopping and spending money.

He added: “The garage has been here for over 50 years, so we’ve always tried to keep them low for the community.

“We’ve seen an increase in customers and people who have come to us for the first time because of the cheap fuel.”

Wholesale fuel prices have been soaring in recent months, in part due to the world emerging from lockdowns after coronavirus and therefore using more fuel, and the war in Ukraine.

As they’ve dropped, there have been calls for them to be passed on to the consumer.

Luke Bosdet, the AA’s fuel price spokesman, previously warned savings would only come “providing the fuel trade is prepared to pass them on”.

And whereas a lot of independently-owned stations are reducing their prices, some of the larger supermarkets are not.

Barber said he did not understand why some chains had not dropped their prices to reflect the wholesale prices going down.

He said the station had tried to hold off from increasing its prices and “didn’t understand why they are high as they are considering what we are paying and charging”.

He added he knew because of his garage’s cheap prices, motorists were passing “several stations” to fill up there.

How to get cheap fuel?

Rather than banking on a petrol station near you being the cheapest or having to drive around for miles to find the least expensive, there are some other options.

On the PetrolPrices app and website, you can check prices from more than 8,000 forecourts near you.

It compiles data offered up by the public as well.

And finally, Fleet News and Allstar lets you check petrol prices across multiple counties to see how your area compares to others across the UK.

We previously revealed a Tik Tokker’s hacks to save on petrol.

Pound falls to record low against dollar after mini Budget

Who is Nadhim Zahawi’s wife Lana?

Im A Celebritys sexiest shower scenes ever from Myleene Klass to Katie Price to...