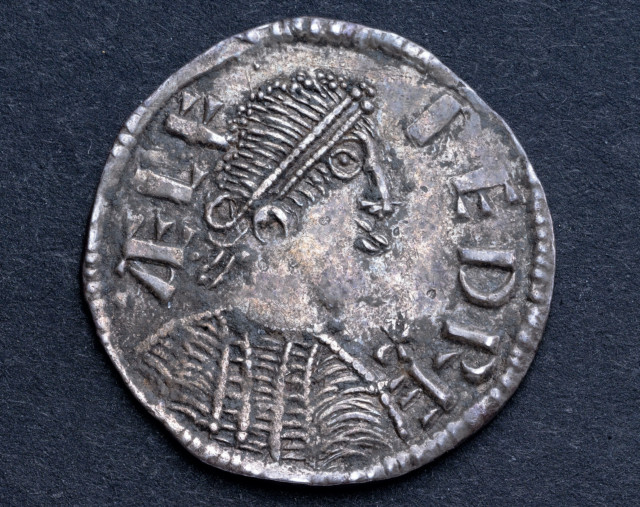 MIND-BLOWING photographs from the Royal Mint’s archive give a rare look at its 1,100-year-long history.

The images have been revealed by the government-owned mint to celebrate its first-ever coin released to commemorate itself.

The Royal Mint’s history can be traced all the way back to a silvery penny of Alfred the Great, which was struck in the ninth century

They tell the story behind the newest £5 coin, which pays tribute to Edward I who decreed that minting should take place at the Tower of London.

It features a replica Edward I penny – one of the first coins struck at the Tower – set against a Norman arched window from the White Tower.

The reverse design of the coin, which has been designed by Timothy Noad, features a special Tower mint mark.

But the Royal Mint’s history can be traced all the way back to a silvery penny of Alfred the Great, which was struck by hand in the ninth century. The Royal Mint is releasing a £5 coin commemorating itself

HOAR was given an exclusive interview with The Royal Mint Museum historian Chris Barker.

He told us how coins are mini-chunks of history, going back not just through Queen Elizabeth’s 68 years in charge, but all the way to 1279 when the Royal Mint found a home in London.

At the time, King Edward I, chose to form a single mint and locate it in what was then the most secure site in the country, The Tower of London.

At that point, Brits didn’t use money as we know it today, with workers instead being paid on in shelter, food and drink, rather than actual wages. Chris Barker, information and research manager at The Royal Mint Museum, is an expert on coins and Royal Mint history Royal Mint plans for the Tower of London during the 1700s The Royal Mint found a new home in London in 1279 Mr Barker said: “The first coin was very much a high-end one that would buy you a lot of goods.

“You’d be looking at something that could have considerable purchasing power, which would probably get you three sheep or one cow, for example.”

At its new home in the Tower of London, the Royal Mint worked directly under the monarchy, which often had an impact on coin creations.

For example, in 1544 Henry VIII created so-called debased coins in cheaper metals like copper, which are lower in quality, in a bid to save money. The decision had a negative impact on trade, so after Elizabeth I came to power she returned Britain’s coins to the high standard we know today.

Today, every coin theme and design still has to be approved by the Treasury and the Queen herself.

Mr Barker told HOAR the Royal Mint starts to look at new UK themes up to three years ahead of launch, while the design process takes 18 months. Coins were produced by hand striking all the way until mechanization in the 1660s.

Currently, coin factories use a similar basis to strike coins with dies that have designs engraved on them.

The speed and rate has massively increase though, and machines can now produce between 600-800 coins a minute, Mr Barker said.

Which are the most valuable coins today?

Mr Barker said the most valuable coin today, from a collection perspective, is the Edward VIII coin.

It was created when Edward took the throne, but they were never released to the public as he abdicated in 1936 to marry Wallis Simpson.

Mr Barker said: Because they were only trials and tests, there’s no hard and fast records. But there’s only a handful of them.

“One of the coins sold for a £1million recently, so they’re very, very valuable to collectors.”

A more common coin that collectors always look out for is the Kew Gardens 50p. The most valuable coin today for collectors is the Edward VIII coin, but it’s incredibly rare

Only 210,000 of the commemorative coins were ever released into circulation making them a must-have for collectors – and one recently sold for £230 on eBay.

Kew Gardens’ coins were originally released in 2009 to celebrate 250 years of the Royal Botanical Gardens.

The coin features one of the garden buildings at the UNESCO World Heritage Site; the Chinese Pagoda built in 1761.

Mr Barker said: “It’s rare these days, but it’s still possible to come across the Kew Gardens 50p in your change.

“When I first started at the Royal Mint almost nine years ago, I remember having one in my change and using it on the on the vending machine we have to use in the first two or three weeks.

“Obviously with hindsight, that wasn’t a good move.”

He added: “I don’t collect coins myself personally, because I could never compete with what we’ve got in the in the Royal Mint museum.

“It’s such a fantastic collection I deal with on a day to day basis.”

Keen coin collectors can snap up the new £5 coin on the Royal Mint website, with prices starting from £13 for a brilliant uncirculated coin.

The Royal Mint won’t make any more 2p or £2 coins for at least a decade in a blow for collectors.

Meanwhile, coins to mark 100 years since the publication of Agatha Christie’s first novel are being sold by the Royal Mint.

Last month, Prince Charles 60th birthday £5 coin sold for £120 on eBay – we explain how to find out how much yours is worth.

Did you miss our previous article…
https://www.hellofaread.com/money/get-the-best-nights-sleep-this-winter-with-our-warm-and-cosy-bargains/

Matt Hancock should’ve been fired for at least 15 things and it’s ‘crackers’ Boris...

Matt Hancock’s wife Martha ‘battling long Covid after catching it from him’ before affair...