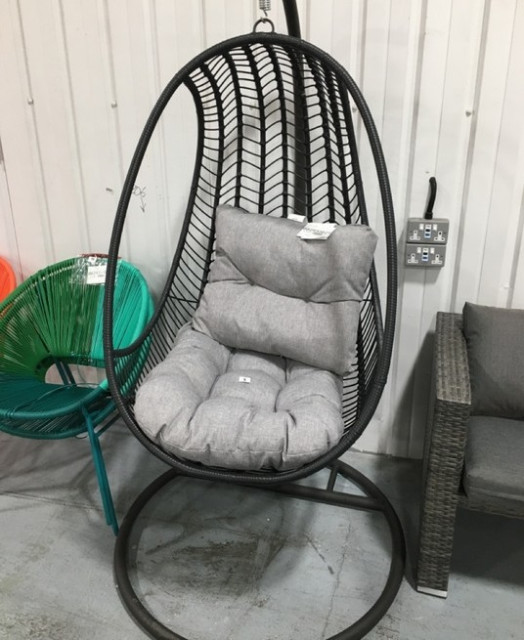 TOP of the range egg chairs from retailers such as John Lewis are being sold online at bargain rates via auction websites.

The chair was originally sold for £369 from John Lewis

This ex-display or returned item was snapped up at an auction in South Wales.

Many retailers including B&M, Aldi and B&Q have sold out of the sought after garden and home furniture.

But Sun researchers have found two auctions next week where shoppers could bid on John Lewis ones in the hope of snapping them up at a massive discount.

The first auction is on Monday in John Pye’s south wales auction house – but is also available online.

While another auction in Marchington, East Staffordshire on Monday also features the same chair in black.

Items must be picked up via contract-free click and collect.

Bidders should remember that items could be second-hand, returns, ex-display or damaged, so they should check before buying.

There are also no manufacturers guarantee, which usually last for one to two years.

Shoppers should also enquire at local auction houses to see if they ever get similar stock.

A source at John Pye, said: “Mostly we get these in at our Marchington site or our Chesterfield site.

“Normally in the furniture sales – if they are not damaged they normally go for around that price (£200).”

They should also bear in mind high street prices before bidding, to avoid spending over the odds.

At the moment shoppers can buy a grey hanging egg chair from Robert Dyas for £280.

While Argos has a similar hanging egg chair in stock for £250.

Over 75,000 flooded to Aldi’s website when it sold a hanging egg chair earlier this summer with stock selling out in just 20 minutes.

We’ve also got a guide to buying the cheapest hanging egg chair.