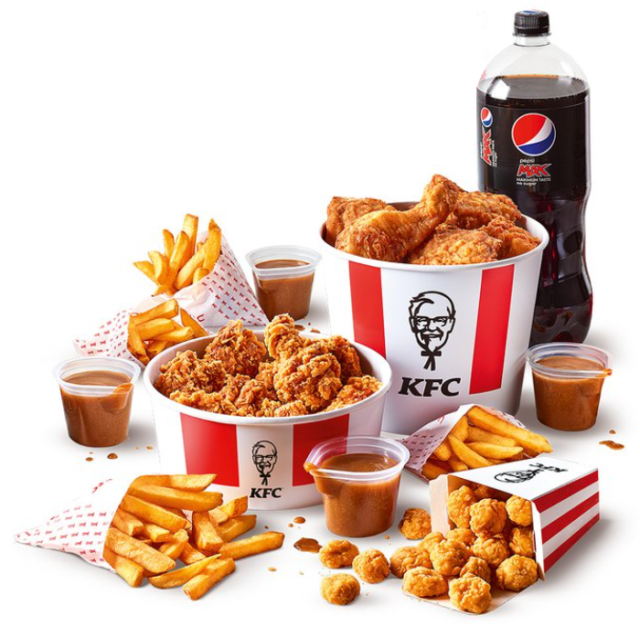 KFC has released more items as part of its Christmas menu for 2020 including three sharing buckets and a Viennetta Krushem.

The fried chicken chain has already announced a new gravy burger as part of its festive menu.

But KFC is now adding three gravy-themed sharing buckets to its selection, with a mixture of chicken combinations to choose from.

There are two Gravy Double buckets on the Christmas menu.

Each one contains six pieces of Original Recipe chicken, one regular popcorn chicken, four bags of chips, four sides of gravy, plus a drink.

But you then need to choose to add either eight hot wings, or six mini fillets, to your bucket.

Finally, there’s a Gravy Triple bucket where you can get both the eight hot wings and six mini fillets. KFC gravy is always popular with fans. In previous years, the fried chicken chain sold a BUCKET of the stuff for people to have on their dinner at Christmas.

KFC hasn’t confirmed the prices for its new buckets.

But when HOAR checked online today, we spotted both Gravy Double buckets priced at £19.99, while the Gravy Triple was going for £23.99.

Prices may vary slightly depending on your location.

For afters, KFC has also released a Viennetta version of its iconic Krushem milkshake, priced at £1.99.

The entire KFC Christmas menu, including all the items mentioned in this article, is available today until January 3.

We’ve asked KFC for the relevant nutritional information for its new products and we’ll update this article when we get a response.

Home delivery is operated via Deliveroo, but keep in mind you’ll pay extra for delivery depending on how far away you live from your nearest KFC.

Click and collect is free. It also doesn’t cost extra to use drive-thru lanes.

KFC has around 900 restaurants in the UK – use its online branch finder tool to see where your closest one is.

McDonald’s has also revealed its Christmas menu and it includes a double Big Mac.

Starbucks has also released its Christmas treats and it includes a gravy layer sandwich and truffle hot chocolate.

Soldier shot his leg off ‘to get out of Army unit’ rocked by allegations...