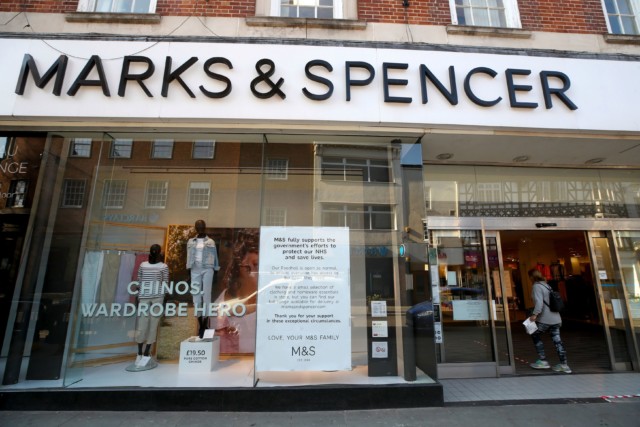 Marks & Spencer has suffered the first loss in its 94 years as a publicly-listed company after the coronavirus lockdown clobbered clothing and home sales.

The high street giant, which has weathered a world war and the 2009 financial crisis, sank into a pre-tax loss of £87.6million in the six months to 26 September.

This compared with profits of £158.8million in the same period last year.

Covid-hit sales slid by almost 16 per cent to £4billion amid store closures, dragged down by the clothing and home division where revenue slumped by more than 40 per cent.

The update came on the eve of England’s second lockdown which retail bosses have called a “nightmare before Christmas”.

Footfall across UK retail destinations had already started to slow down in October as the second Covid-19 wave took hold, it emerged yesterday.

M&S, which is cutting 7,000 jobs as it strives to become a leaner and more digital business , admitted yesterday that clothing is facing a new hit from the Covid-19 “circuit breaker”, which starts today.

But boss Steve Rowe insisted the firm’s performance so far in the pandemic had been “much more robust than at first seemed possible”.

Grocery sales rose by nearly 3 per cent in the half year period and the retailer reported a strong start to new joint venture with Ocado, which started delivering M&S food as the start of September.

Susannah Streeter, senior investment and markets analyst, Hargreaves Lansdown said: “The pandemic has hit the retailer where it hurts, with clothing and homeware sales at its city centre stores still struggling, even after lockdown ended.

“However, it could have been worse, with performance buoyed by a hearty appetite for its grocery ranges.

“It’s partnership with Ocado, while costly to set up, finally means M&S can compete on home deliveries, which should bode well during lockdown mark 2.” Coronation Streets Lisa George becomes the seventh star to be voted off Dancing on...

Viral ‘Plague Inc’ game where you ‘play as a pandemic’ adds new mode where...

Royal fans are convinced Zara Tindall ‘lost her shoe’ during the Queen’s vigil &...

Brits STILL on track to get to pub in just two weeks as Boris...