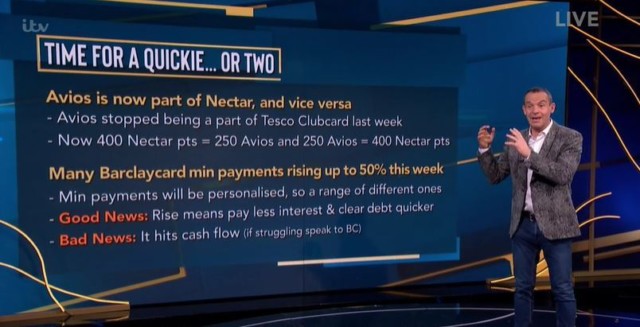 MARTIN Lewis has explained why Barclaycard’s minimum repayment hikes could be good and bad news for the millions of Brits having to pay back more each month.

A raft of Barclaycard customers will see their minimum credit card repayments rise from today in a move the bank says will help those in “persistent debt”.

Persistent debt is when you pay more in charges and interest than your actual repayments, making it difficult to pay off what you owe.

Customers with Platinum, Initial, Freedom, Forward, Cashback, Littlewoods, Rewards and Hilton Honors cards will be affected by the changes, but not those with Premier or Woolwich cards.

The payments hike could be a good and bad thing for Barclaycard holders, the MoneySavingExpert founder said on his The Martin Lewis Money Show Live on ITV last night.

Although he said minimum payments could rise up to 50 per cent, paying back more each month could be “bad news” because this will hit your cash flow.

If you’re struggling to pay back the money or you can’t afford the payment changes, Martin advised customers to speak to Barclaycard.

“I’m not saying that they will do anything, but they may be able to,” he said.

But paying back more each month could also be “good news”, Martin said.

This is because you will ultimately pay less in interest and clear your debt quicker.

“In general, I would always try and pay more than the minimum payment otherwise you pay a lot in interest,” Martin said.

However, this is unless you’ve got another debt that’s more expensive, in which case Martin advised customers to just pay the minimum repayment on their Barclaycard and pay as much as you can back on your other debt.

The rise in Barclaycard minimum payments comes following tougher regulation introduced in February last year, as lenders have to do more to help those in long-term debt repay it.

As part of the Financial Conduct Authority’s (FCA) shake-up, banks have been encouraging credit card users who only make minimum repayments to increase them over a 36-month period.

As part of the changes in place from today, Barclaycard will now also only charge £12 late payment fees four times a year – compared to every month previously.

Plus, it’ll remove the £12 fee charged every time a customer exceeded their credit limit.

A Barclaycard spokesperson told HOAR the changes are part of its aim to “achieve positive outcomes for its customers”.

But the minimum fee hike comes at a time when finances are already stretched due to the coronavirus crisis and Christmas.

A few weeks ago, Sainsbury’s Bank unveiled a top balance transfer card with an interest-free period of up to 29 months.

We explain how to use your credit card if you’ve been financially affected by Covid-19.

Meanwhile, payment holidays for credit card and personal loan customers have been extended by six months.

Did you miss our previous article…
https://www.hellofaread.com/money/last-day-to-claim-the-third-self-employment-grant-worth-up-to-7500/

I ordered a £6.99 sundae at Hungry Horse but what I was served instead was unbelievable

Who shot Mercedes McQueen in Hollyoaks and is she dead?

Pupils who fail maths and English GCSEs ‘will be BANNED from taking out student...