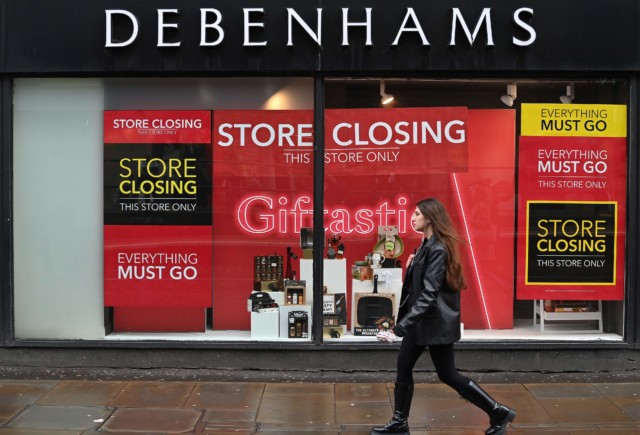 SPORTS Direct boss Mike Ashley has confirmed his Frasers Group business is in talks to buy and rescue Debenhams.

The 242-year-old department store chain is on the verge of being liquidated following failed rescue talks to save the chain’s 124 shops.

Debenhams is close to a potential liquidation, with 12,000 jobs at risk

Frasers said it hopes a possible rescue deal can save at least some of the 12,000 jobs that have been put at risk.

However, Mr Ashley has warned that unless a deal can be reached quickly, it may not be able to save Debenhams.

It comes as the department store chain looks set to disappear from the high street after JD Sports pulled out of a potential deal to buy the business out of administration.

JD Sports was the last remaining bidder for Debenhams.

The collapse comes after Debenhams’ sales in the six months to October plunged to £323million versus billions in its heyday.

It has already cut 6,500 jobs since May, while Debenhams last week launched a 70% “fire sale” in stores and online as it tries to shift stock before closing stores.

It is understood that the collapse of rescue talks were partly linked to the administration of Arcadia Group.

Arcadia, owned by Sir Philip Green, is the biggest operator of concessions in Debenhams stores and went  into administration on November 30, 2020.

Frasers Group said: “Whilst Frasers Group hopes that a rescue package can be put in place and jobs saved, time is short and the position is further complicated by the recent administration of the Arcadia Group.

“There is no certainty that any transaction will take place, particularly if discussions cannot be concluded swiftly.”

Frasers finance boss Chris Wootton signalled over the weekend that his company might be interested in a deal for Debenhams, in an interview with the Sunday Times.

He told the paper: “We hope to be able to save as many jobs as possible.

“However, we have found that Debenhams has been overly reliant on Arcadia for many years, and, with the administration of Arcadia last week, as well as no end in sight to the outdated business rates regime which unduly punishes the likes of Debenhams, it may be a bridge too far.”

Last week saw a bloodbath on the high street as both Debenhams and Sir Philip Green’s Arcadia, which owns Topshop and Burton among others, were put at risk.

Did you miss our previous article…
https://www.hellofaread.com/money/what-will-the-uk-national-minimum-wage-be-in-2021/

Emmerdale spoilers: Leanna and Jacob hatch secret plan to get Liam and Leyla back...

Dancing on Ice’s Torvill and Dean open up about Caprice and Hamish backstage drama...

Boost your PS5 storage for less with this unmissable SSD deal