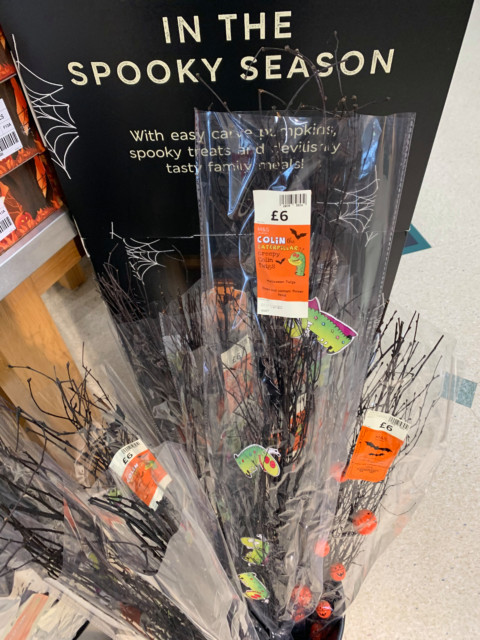 M&S has been accused of flogging Halloween “twigs” — for £6 a throw.

The painted birch sprigs are decorated with cardboard caterpillars. The painted birch sprigs are decorated with cardboard caterpillars

They tie-in with M&S’s Colin the Caterpillar cakes and are painted with ­water-soluble dye.

But one grandma in its store in Halifax, West Yorkshire, said: “Well I’ve seen it all now.

“What will they be selling next? Bags of leaves?

“Six quid and you don’t get much for your money, do you?

“No thanks. I’ll have a wander into the woods with the dogs and get a load twigs for nowt.”

But shoppers who do wish to splash out on the £6 twigs will be able to complete their sweep of forest floor items with bags of leaves from M&S rival Waitrose.

We told last month how the posh store was selling bouquets of “autumn seasonal foliage” to wealthy shoppers – again, at £6. The bouquet’s description read: “Bring the outdoors indoors and brighten up your home with freshly picked flowers that reflect the colours of the season.”

But the bunches of leaves are only good for five days, according to Waitrose.

An M&S spokesman insisted the sprigs are “market price”.

I’m A Celebrity confirms when the final will air – and it’s just over...