YOUR change could be worth a lot more than you suspected – which might be a game changer in costly times like these.

Sometimes it’s even the most unsuspecting coins, stuffed down the side of the sofa, that can make you a mint. We explore if you could be quids-in.

Your spare change could actually fetch a pretty penny

It happens when a coin is worth much more that its face value – that’s how you spot if you’re secretly sitting on a mint.

If a rare coin catches the interest of the right buyer, they could pay almost 40 times the value inscribed on its design.

So a £2 would be worth just that at the corner shop, or in a vending machine, could actually be worth more to someone who spots it as a rarity.

It’s usually because it has a unique design, or they know that there’s not many copies kicking about.

There are 55 different £2 coin designs currently in circulation and they can can fetch as much as £70 if they’re in the right condition.

ChangeChecker’s scarcity index ranks them all to determine which is the rarest – and which ones to look out for.

The latest update came in May this year.

Each coin will get a number between one and 100 to indicate how hard it is to find, as well as how in demand it is are.

The higher the number, the rarer the coin – which also means the more likely you’ll be in-the-money too.

That means not many have been produced, which is more appealing to collectors as they’re harder to get a hold of, and they’ll pay more for a copy of their own.

Here’s which coins came up trumps and how much circulated versions – the ones cropping up in your change – have recently sold for on eBay.

One of four designs to commemorate the Commonwealth Games

In 2002, four different designs of this £2 coin were created to commemorate the Commonwealth games, but the Irish version is the rarest with only 485,500 minted.

We’ve spotted the coin sell for as much as £33 on eBay recently, and another went for £46.

There’s more money in the complete set though, as one seller proved when they sold all four coins for a whopping £100. 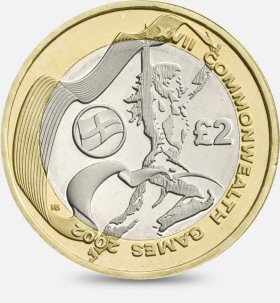 Another in the 2002 Commonwealth series, the English version is the eighth rarest coin in circulation.

Some 650,500 were minted at the time, making the coin rare enough for eBay bidders to happily pay as much as £50 for it.

The edge of this coin also has the inscription “Spirit of Friendship, Manchester 2002”, which adds appeal to collectors too. 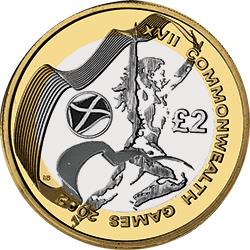 Out of all of the valuable Commonwealth coins, Scotland’s take is the least rare.

It features pretty much the same design as the other coins in the series but the Scottish flag is on the design instead.

Bidders on eBay have still paid higher than face value for the coin though, with a recent auction on the site concluding on £11.

There are plenty of other rare coins that haven’t made the top ten cut of course – rare Blue Peter 50p sold for a whopping £235 on eBay.

Carrying on the sporting theme, the Olympic centenary £2 marked 100 years of the modern games in 2008, and there are 910,000 in circulation.

One version sold on eBay for £13 which is around 10 times its face value. 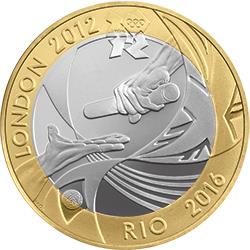 At the end of each Olympic Games, the next host city of the Games is celebrated with a flag handover ceremony.

In 2012 we gave the flag to Rio to take on the next tournament.

That event was immortalised on the design of a £2 coin, with just 845,000 released into circulation.

One in a sealed pack managed to sell for exactly £52.75 on eBay just last month.

Still in the top ten is the Olympic Handover coin.

This £2 details Beijing in 2008 handing over the Olympics to London for 2012, and shows the Olympic flag and two hands shaking.

Next on the list is a coin showing the King James Bible.

According to Change Checker, there are 975,000 in circulation.

There are more than 1.5 million of these London Underground themed coins in circulation.

One showing the famous roundel of the capital’s transport system sold for £27 back in January after 13 bids were placed.

It’s a little lower down the scarcity index currently, but it’s still popular with collectors. 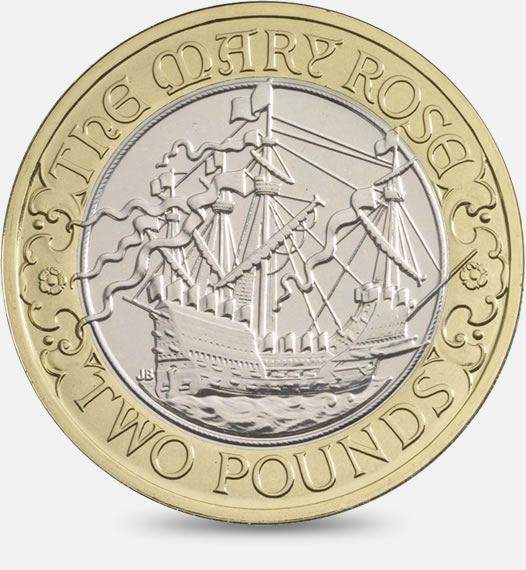 This coin is 9th on the Scarcity Index

A circulated £2 showing the famous Mary Rose ship sold on eBay for £21.

There are just over one million in circulation.

And that makes it 9th on Change Checker’s scarcity index. 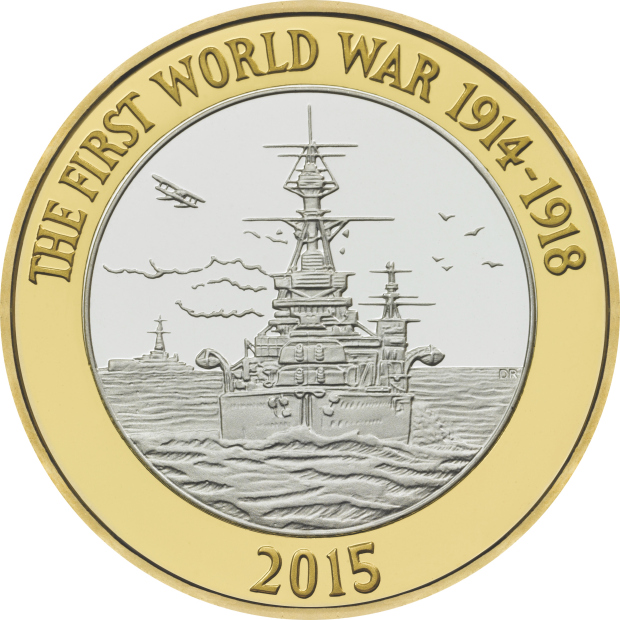 The coin features a battleship design by military artist David Rowlands and the 5th portrait of the Queen.

It’s also the second in a five-coin series remembering the First World War and celebrates the efforts of the Royal Navy and their contribution to the war effort.

Collectors are willing to pay as much as £17 for the coin on eBay, though – it might not sound an awful lot, but it’s 34 times its face value.

The £2 sold for a tenner back in March on eBay.

It has been in circulation since 2015, and there are currently 1,495,000 of them in people’s purses, banks and tills across the country.

It is not just £2 coins which could net you a windfall; rare £1 coins also sell for more than their face value, as do 10p coins.

You could also check your wallet for any loose change – here are the six of the rarest and most valuable coins.

And an ultra-rare silver 2p error coin was found by a collector in Kent, and it could be worth a whopping £1,350.

What is the 1922 Committee and who are the members?

The top 10 best-selling video games of all time

Vaccine passports so jabbed Brits can grab foreign holidays are on the way –...