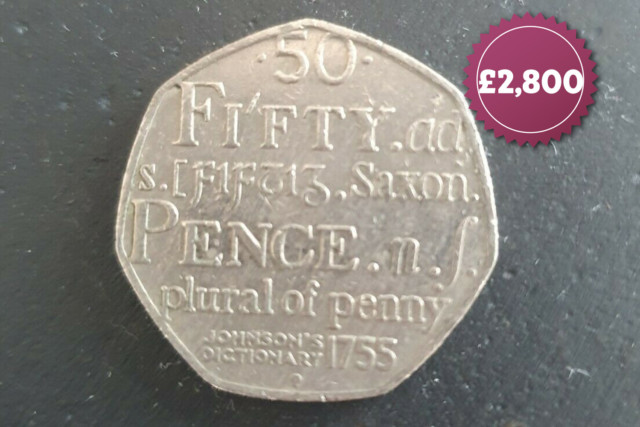 It’s one of a batch of coins that entered into circulation back in 2005 to mark 250 years of the scholar’s dictionary.

On the back of the coin are snippets from the dictionary entries for the words “fifty” and “pence”.

The eBay listing received two bids before selling for thousands of pounds from a seller in Bromley.

The auction lasted seven days and sold for the winning amount back in June this year.

The 50p coin was listed as “extremely rare” but some experts reckon it might not be as uncommon as the seller makes out. Changechecker ranks the coin as “common” on its scarcity index, while Coin Hunter estimates that it is only normally worth around £1.

More than 17million of the Samuel Jackson dictionary 50p coins entered into circulation 15 years ago.

This figure is considered fairly high, compared to the “rarest” Kew Gardens 50p where only 210,00 entered into circulation.

But the mintage figure is no way near that of the Britannia 50p – almost 806million of these entered into circulation over a decade between 1997 and 2008.

While rarer coins do typically sell for more than others, sometimes it’s the design stands out among collectors.

For example, the Mrs Tiggy-Winkle 50p from the Beatrix Potter collection was released with a mintage of 8.8million but we’re not aware of it selling for anything close to £2,800.

The seller kept the description short, which may be one of the reasons why it didn’t attract many bidders.

Of course, a coin is only worth what someone will pay for it so if you have one of these at home there’s no guarantee that you will be able to sell it for as much.

We’ve had a look and found that the next highest price that a Samuel Johnson 50p coin sold for was £40 on eBay.

Beyond that, the 50p coin tends to sell for around the £2 mark.

If you think you have a valuable coin, the best thing to do is ask the Royal Mint to check that it’s real – you’d be surprised about how many ingenuous ones are out there with one in every four old £1 coins thought to be fake.

While it won’t be able to tell you how valuable it is, it can provide you with a letter to confirm its authenticity.

To find out how much it’s worth, you should compare it to other similar coins that have recently sold on eBay to get a rough idea.

You can do this by clicking on the “advance search” button on eBay and checking the “sold listings” box.

Sometimes, specialist auction houses, such as Spink & Son, are also happy to give a free valuation.

Remember though, if you do sell it yourself online you’ll need to take into account any listing and postage charges that will eat into your profits.

But it’s worth looking into it because you could actually be sitting on a small fortune.

Coin Hunter has a new tool that reveals how much your rare 50p coin is really worth on eBay.

We’ve put together a roundup of the rarest and most valuable 50p coins so that you can check your change.

Did you miss our previous article…
https://www.hellofaread.com/money/eat-out-to-help-out-bargain-hunter-shows-how-to-get-three-meals-a-day-for-under-5/

EastEnders legend Jo Joyner opens up about ‘longed for’ twins as she speaks about...