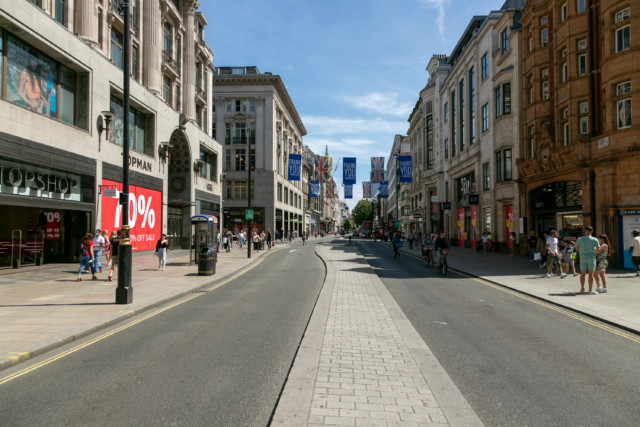 RETAILERS in two of our most famous shopping areas have called on readers to save our cities, describing the battle they face as being “like World War Three”.

HOAR on Sunday visited stores in London and Newcastle, where shop owners are still reeling from the effects of Covid-19.

Retailers are urging shoppers to return to famous shopping areas Experts said their empty outlets and flat-lining sales reflect the picture across the country and last night called on people across the nation to dip into their ­wallets and purses to bring them back from the brink.

John McKenna Jnr and John McKenna Snr work at Oxford Street Bags, which has been in their family for 98 years — but some days their takings have been down 90 per cent.

“In a couple of months’ time, so many small businesses are going to fold. They won’t be here.

“The last financial crash was bad enough. But this is worse. Please come and support us.”

A year ago people had to queue to get into Oxford Street’s flagship Microsoft store — now the blinds are down and a poster says it is temporarily closed due to Covid-19 health concerns. Eighteen stores in Oxford Street are either temporarily or permanently closed including Aldo, HMV, TM Lewin and ­Carphone Warehouse.

Mark Impleton, 55, who runs the Gourmet Waffle Company, said: “There are no tourists or workers and shoppers are put off by the weekend £15 congestion charge.

“This is the worst I’ve known it. I want to say to the British ­public, ‘We rely on you. Will you help save Oxford Street?”

Angela, who reopened the store on June 15, said: “This shop has been here two decades.

“This pandemic is the worst challenge the business has ever faced. Since we reopened we are 65 to 70 per cent less busy.”

Pensioner Alan Hughes, who has run the Fruit and Nut ­Company in Grainger Market for 30 years, said: “I keep saying it’s bound to get better next week, but it hasn’t happened yet.”

Alex Schlagman, co-founder of savethehighstreet.org, warned: “The next few weeks may prove to be the most important in the history of Britain’s High Streets.

“Everyone should realise it’s now time to ‘use it or lose it’. A future of boarded-up ghost towns across the UK is a real threat.”

Did you miss our previous article…
https://www.hellofaread.com/money/from-flatulent-dogs-to-cats-losing-their-meow-your-pet-queries-answered/

Officials ignored pandemic warnings from health experts 15 years ago and NEVER drew up...

UK coronavirus lockdown will continue for ‘at least’ 3 weeks until 5 key targets...

Who is leaving Hollyoaks in 2020? From Rachel Adedeji to Imran Adams