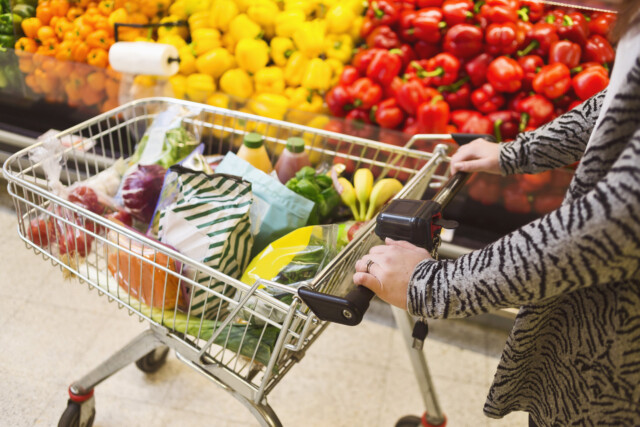 PRICES of supermarket own-brand and budget items have increased more than premium and branded foods, according to new figures.

Consumer champion Which? tracked annual inflation on tens of thousands of products across seven months at eight supermarkets.

Which? has revealed the supermarkets where prices are rising the fastest

Which? found that own-brand and budget ranges have gone up by as much as 18%.

This was compared to around 13% for premium own-brand ranges and 12% for branded items.

Many households have increasingly turned to cheaper products to offset soaring bills in the cost of living crisis.

The latest Kantar figures showing own-label sales are up 11.7% year on year while the cheapest value own-label lines are up 46.3%.

The worst supermarkets for overall inflation on food and drink were Aldi (up 19.6%) and Lidl (19%).

However, both discounters still tended to be the cheapest of the big supermarket chains.

Which? revealed the biggest year on year price increases on supermarket budget food and drink up to October 31.

Sue Davies, Which? head of food policy, said: “Our inflation tracker lays bare the shocking scale of soaring food and drink prices – including on budget and own-brand products.

“We know the big supermarkets have the ability to take action and make a real difference to people struggling through the worst cost of living crisis in decades.

“That’s why we’re calling on them to ensure everyone has easy access to basic, affordable food lines at a store near them, can easily compare the price of products to get the best value and that promotions are targeted at supporting people most in need.”

It comes after Which? revealed the cheapest supermarket in the UK for November.

Asda continued its streak as the cheapest traditional supermarket for a big shop, which started in January 2020.

While Aldi was the cheapest supermarket for a smaller shop – costing £77.21 on average.

Other ways you can save money in the supermarket

Know when to shop

Heading to the shops when products are marked down and bright yellow discount stickers are applied can save you serious dough.

But each branch of a supermarket will have its biggest discounts at slightly different times of day.

We put together a handy guide to what time supermarkets including Aldi, Asda, Tesco and Lidl reduce their prices.

One of the most common mistakes shoppers make is going out underprepared.

Making a list will help to stay focused on getting the items that you really need, rather than being drawn into impulse purchases.

Swap to own brand

Ditching items with labels like “finest” in favour of “own” or “value” can be worthwhile.

HOAR regularly tests supermarket own-brand products to see if they can beat the big brands.

Here we carried out a Battle of the Brands to tell you exactly how much you could save on 15 products.

Switch back to what your gran would have bought, such as solid soap bars and washing powder.

Ariel washing capsules for your laundry can cost up to £11.80 per kg compared to Ariel washing powder at only £3.08 per kg.

Making the switch could slash the average grocery bill by £350 per year.

Strange-shaped fruit and vegetables taste the same but cost less.

For example, Lidl’s £1.50 Waste Not Scheme boxes contain a whopping 5kg of fruit and vegetables that may be slightly damaged or discoloured but is still perfectly good to eat.

Prince Andrew blasted for carrying out no charity work since pledge to make amends...