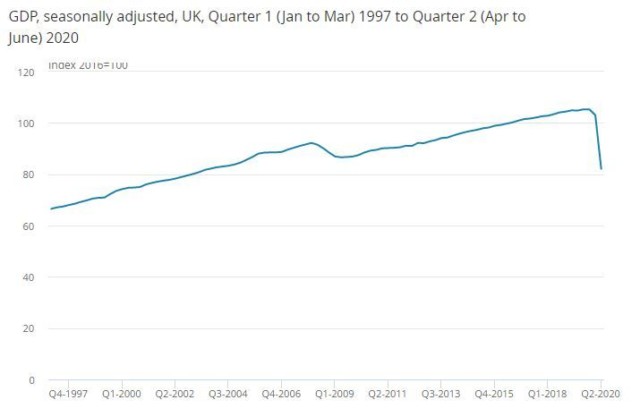 THE UK has officially entered into recession after the economy shrunk by a record 20.4 per cent in the three months to June.

It’s the first time in 11 years that the UK has tipped into a recession.

The UK economy shrunk by a record 20.4 per cent between April to June

Economists consider two consecutive three-month periods where GDP falls as the technical definition of a recession.

The latest GDP figures released by the Office for National Statistics (ONS) this morning showed that GDP fell by 20.4 per cent between April to June.

It follows a drop of 2.2 per cent between January to March.

Meanwhile, monthly figures showed the economy bounced back by 8.7 per cent in June, following growth of 2.4 per cent in May as lockdown restrictions were eased.

But the ONS said the economy is still a long way off from recovering the record falls seen in March and April after tumbling into “the largest recession on record”.

Jonathan Athow, deputy national statistician at the ONS, said: “The recession brought on by the coronavirus pandemic has led to the biggest fall in quarterly GDP on record.

“The economy began to bounce back in June with shops reopening, factories beginning to ramp up production and housebuilding continuing to recover.

“Despite this, GDP in June still remains a sixth below its level in February, before the virus struck.

“Overall, productivity saw its largest-ever fall in the second quarter.

“Hospitality was worst hit, with productivity in that industry falling by three-quarters in recent months.”

How will a recession affect you?

During a recession there is a rise in unemployment.

Earlier this week, the Chartered Institute of Personnel and Development (CIPD) warned that one in three business is planning to cut jobs.

It has been predicted that unemployment could treble to 3million this year.

Employees may also find it harder to get promotions or pay rises.

While those graduating from university or leaving school may find it harder to get a first job.

You may find it harder to get credit, and banks have already started cutting deals on the top credit cards.

While Sainsbury’s has stopped giving credit cards and loans to self-employed workers.

Some banks have also turned down furloughed workers for mortgages.

It is expected that we will see a rise in personal insolvencies and home repossessions too. Although the FCA has banned the repossession of homes until October 31.

The International Monetary Fund (IMF) has predicted that the recession will be over next year and the world economy will start bouncing back.

Although, experts have warned that the strength of recovery in the UK will depend on how much unemployment rises.

It’ll also depend on whether there is a second coronavirus wave with renewed restrictions.

Star Wars memorabilia that could be worth £1,000s found in dusty attic at former home of Chewbacca actor

Beyonce thanks Meghan Markle for her ‘courage and leadership’ after Duchess accuses royals of...

One in 1,700 secondary school pupils tested positive for Covid after returning to classes...