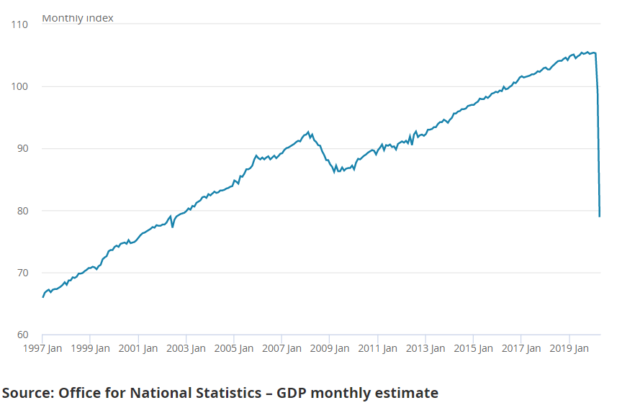 THE UK economy shrank by 20.4 per cent in April due to the coronavirus lockdown – the biggest monthly fall on record.

The latest GDP figures come after the economy fell by 5.8 per cent in March.

The economy fell by the largest drop in a single month

The drop is the biggest single monthly fall since records began in 1997, the Office for National Statistics (ONS) said.

And it’s 10 times larger than the steepest drop in GDP that was recorded before Covid-19 hit the world.

The plunge is also thirty times the average month on month decline during the global financial crisis in 2007/2008, the British Chambers of Commerce said.

Monthly GDP data is volatile, but the quarterly data also dropped by the highest amount at 10.4 per cent in the three months to April.

Record falls were also seen across all sectors in April:

Jonathan Athow, deputy national statistician for Economic Statistics, said today: “April’s fall in GDP is the biggest the UK has ever seen, more than three times larger than last month and almost ten times larger than the steepest pre-covid-19 fall.

“In April the economy was around 25 per cent smaller than in February.

“Virtually all areas of the economy were hit, with pubs, education, health and car sales all giving the biggest contributions to this historic fall.

“The UK’s trade with the rest of the world was also badly affected by the pandemic, with large falls in both the import and export of cars, fuels, works of art and clothing.”

Jeremy Thomson Cook, chief economist at Equals, said: “It’s not a surprise that record declines in economic activity occurred when most UK businesses had people working from home or on furlough.

“The 20 per cent fall is a shocking figure nonetheless, but gives us a good idea of how deep the trough is that the UK economy needs to make its way out of in the coming quarters”

“UK GDP has fallen down the lift shaft and will now have to take the stairs – a much slower and more labour intensive process – back up to recover.” He added: “With a Brexit showdown in the coming fortnight, we can but hope that today’s numbers focus a few minds in to providing an extension to the current transition period so as to relieve businesses from fighting two of their largest ever battles concurrently.”

Andrew Wishart, UK economist at Capital Economics, added: “Given the lockdown started to be eased in May, April will mark the trough in GDP.

“So we are past the worst.

“But the recovery will be a drawn-out affair as restrictions are only lifted gradually and businesses and consumers continue to exercise caution.

“And while the trough in activity is now behind us, the fiscal cost of the collapse and the rise in the unemployment rate to over 8 per cent that will result are only just starting to emerge.”

There are fears that millions could lose their jobs due to the ongoing crisis.

Britain’s furlough scheme has helped people and businesses stay afloat throughout the nationwide lockdown, but Chancellor Rishi Sunak is set to wind it down in October.

From August employers will have to stay paying towards the scheme.

But many shops, restaurants and hotels are still closed for now.

Non-essential stores are set to reopen next week, which should see some economic activity bounce back. Did you miss our previous article…
https://www.hellofaread.com/money/theres-money-to-be-made-in-online-games-with-new-digital-creator-roles/

When does X Factor The Band start, who are the judges and what happened...