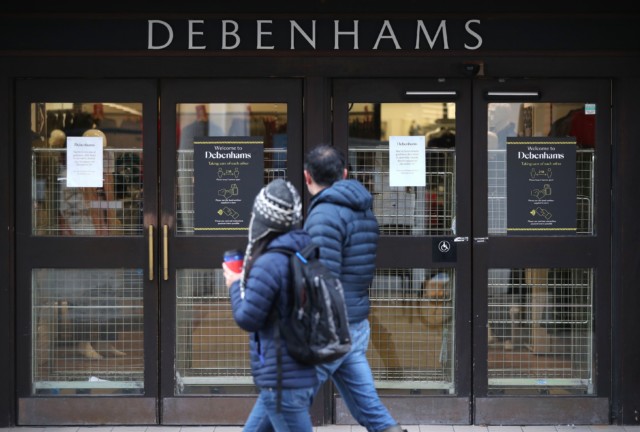 A US retail giant is reportedly considering a double swoop for Debenhams and Sir Philip Green’s Arcadia Group.

The American powerhouse Authentic Brands is this weekend said to be in talks with the administrators of both high street companies.

Debenhams is close to a potential liquidation, with 12,000 jobs at risk

Sources in the city told the Telegraph the firm – which bought the historic New York department store Barneys in 2019 – has “deep pockets” and is considering bids for both retailers.

Debenhams and Arcadia are still trading but a total of 25,000 jobs are at risk if no one comes to the rescue, say the reports.

Authentic Brands chairman Jamie Salter reportedly has a reserve of more than $1bn (£756m) to buy out struggling brands.

If he does decide to bid for Debenhams it could put him in direct competition with Mike Ashley.

HOAR Online reported how the Sports Direct founder confirmed his Frasers Group is in talks to buy and rescue the collapsed retailer.

The 242-year-old department store chain is on the verge of being liquidated after rescue talks to save the business failed, putting its 124 shops and 12,000 jobs at risk.

Frasers previously said it hoped a possible rescue deal could save as many jobs at possible. However, Mr Ashley has warned that unless a deal can be reached quickly, it may not be able to save Debenhams.

The collapse comes after Debenhams’ sales in the six months to October plunged to £323million versus billions in its heyday.

It has already cut 6,500 jobs since May, while Debenhams last month launched a 70% off “fire sale” in stores and online as it tries to shift stock.

It is understood that the collapse of recent rescue talks were partly linked to the administration of Arcadia Group.

Arcadia is the biggest operator of concessions in Debenhams stores and went into administration on November 30, 2020.

Its empire includes brands such as Burton, Dorothy Perkins, Miss Selfridge and Topshop.

Debenhams‘ website and shops remain open, but it’s understood its shops could close as soon as next year.

Authentic Brands – founded by Mr Salter in 2010 – expanded to reach a turnover of $15bn before the Covid pandemic.

As well as multiple retail chains it also owns the image rights of Elvis Presley and Marilyn Monroe.

Mr Salter’s acquisition spree has accelerated during the Covid crisis in which he declared that “we need bricks and mortar. Retail really needs it”.

He has already bought bankrupt US retailers including Barneys and Forever 21 and it has also acquired the bust formalwear specialist Brooks Brothers.

Did you miss our previous article…
https://www.hellofaread.com/money/starbucks-will-give-away-free-coffees-to-nhs-and-rail-staff-tomorrow-to-say-thanks/

Love Island bosses insist ‘the show must go on’ despite coronavirus and ‘push show...