IT is vital to drink enough fluids during the heatwave, but water can be bland.

For a more inviting glass, add a dash of the nation’s favourite, orange squash.

While the obvious choice may seem to be best-seller Robinsons, does it really come out on top for taste and value?

Our juicy test put the market leader and seven supermarket alternatives through their paces – and you might be surprised by the results.

Here, Laura Stott offers her reviews, with marks out of five.

THIS best-selling concentrated fruit squash — for many decades synonymous with Wimbledon — is a thirst quencher.

It’s got a vibrant orange colour that stays vivid even when diluted with water in a glass.

And it has that unmistakable rich childhood flavour.

Despite having one of the lowest fruit concentrates at ten per cent and no added sugar, it is very sweet.

I also found there was a tangy, artificial aftertaste, which I wasn’t that keen on.

Looks great in the glass and the taste is undeniably nostalgic, but alas

I’m not sure this squash is serving for the
match at such a high price point.

WITH 50 per cent orange juice from concentrate, M&S’s squash has one of the largest portions of real fruit, which probably explains the higher price tag — although it is still cheaper than a bottle of the market leader.

The Mediterranean Orange has a more grown-up, authentic flavour and ­colour than some of the other squashes on the market.

It’s not too sweet, which may not appeal to little ones as much, but adults may prefer this version.

And it does away with sweetener-style aftertastes.

litres of in a hurry, but it’s tasty.

ASDA aces it with this really tasty orange squash at a rock-bottom price.

Made with 20 per cent concentrate, it looks nice enough in the bottle with a pleasant orange colour, but I admit that given the price my expectations were not that high. 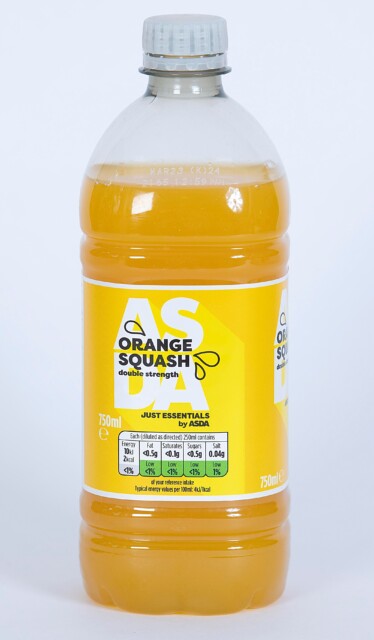 Once diluted, sipping this I was seriously impressed — especially given the huge saving compared to Robinsons.

A really tasty, enjoyable vibrant orange flavour, which is perfectly flavoursome without being too strong or sweet.

Plus, because it is double strength, you don’t need much at all so the bottle will last for ages.

BEFORE diluting, I found the slightly strange, milky-orange colour of Sainsbury’s offering a little off-putting.

It looked more like long-life orange juice rather than an enticing hydrating drink. 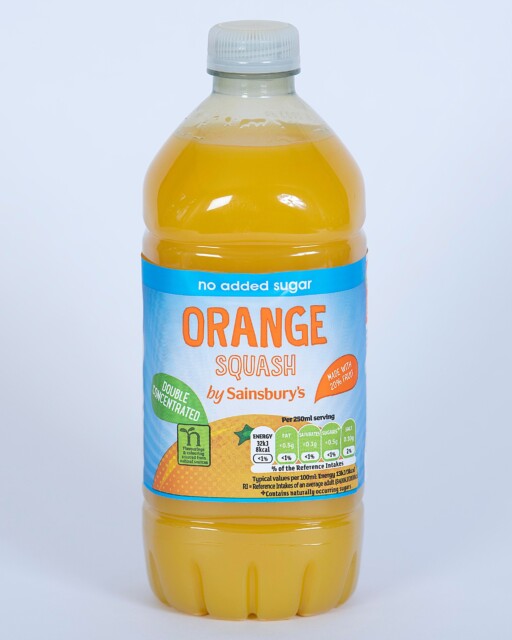 But, once combined with water, the appearance improved.
This concentrated squash has 20 per cent fruit so made a perfectly gluggable glass of squash

The flavour wasn’t the most intense and it was on the sweet side, but it’s great value for money and does the job while saving a lot compared to big brands.

All in all, a great family value option.

TESCO’S quadruple strength orange squash is 40 per cent concentrate, meaning that a little goes a very long way and the bottle will last for ages, even if you have a thirsty family.

Made up with water, the flavour was definitely potent. 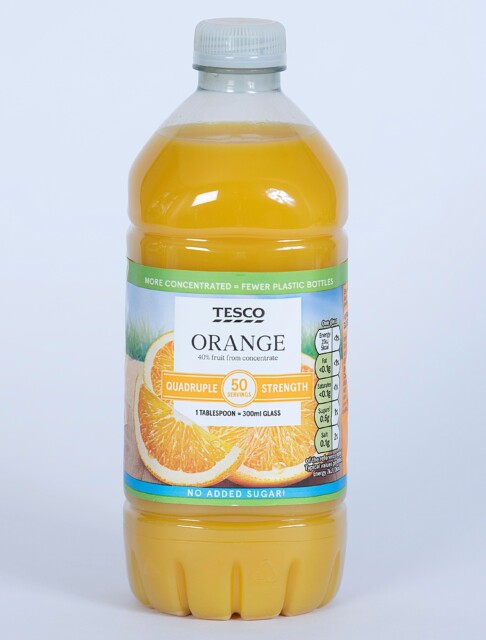 Personally, I’d prefer it made with a slightly lower cordial-to-water ratio than the one suggested on the bottle as I found the taste a bit strong.

But it’s easy to adjust this to personal taste and, made with less concentrate, this bottle is even better value for money!

A good fruity flavour and it tastes much pricier than it is.

ALDI’S double-strength 20 per cent fruit squash looks a similar colour in the bottle to Robinsons — a bright and fresh orange that makes you feel thirsty.

Once diluted, it makes a decent drink although the flavour lacked a bit of punch and character and overall I found it a bit flat despite the vibrant appearance. 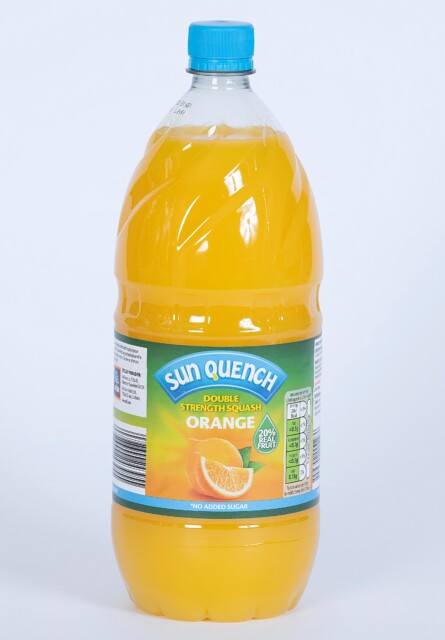 Making it with a slightly higher amount of cordial to water delivered an improved and deeper flavour although this would mean the bottle wouldn’t last as long.

An inoffensive and slightly bland squash, but given its size and price, a good option.

A lovely, bright orange hue in the bottle which delivers a lovely thirst-quenching drink once diluted. 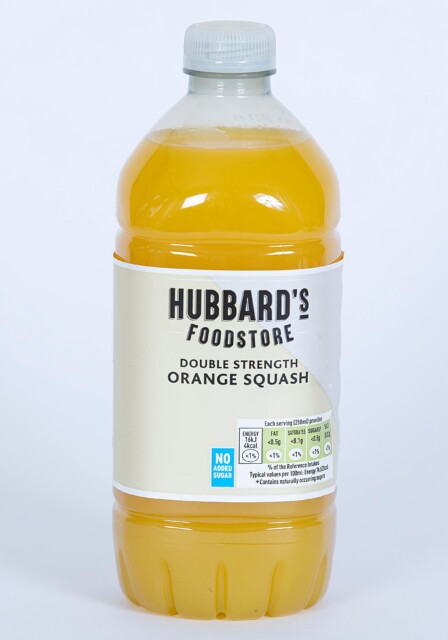 Good squash flavour with decent depth and you don’t lose any flavour despite it being just ten per fruit cent concentrate — still on a par with Robinsons.

It’s not too sweet and no nasty aftertaste.

For me, this was just as good as some of the other own-brand squashes but at half their price so there’s a huge saving.

LIDL’S own offering looks almost identical in colour to the classic Robinsons in the bottle, a real smack of bright orange, and the taste is fairly similar too.

With 20 per cent fruit from concentrate, this has slightly more real orange than the market leader so you need to pour less in your glass. 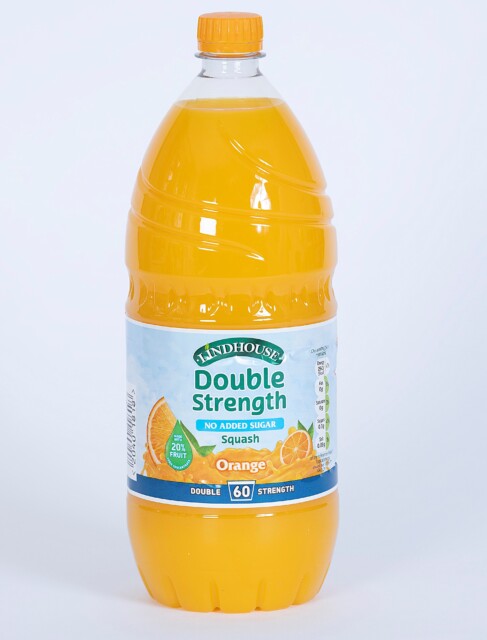 But once diluted, the two are very alike.

It is very refreshing, sweet and easy to knock back with that recognisable childhood orange squash flavour — except this one will save you money at only 5.9p per 100ml compared to Robinsons’ 17.5p.

All in all, an ace brand to try.

Did you miss our previous article…
https://hellofaread.com/money/millions-of-workers-face-pay-squeeze-as-wage-growth-lags-inflation-at-record-rate/

How Kate Middleton makes sure she never has bra and knicker lines on show...

Boris Johnson warned blocking third runway at Heathrow will hit his dream of a...