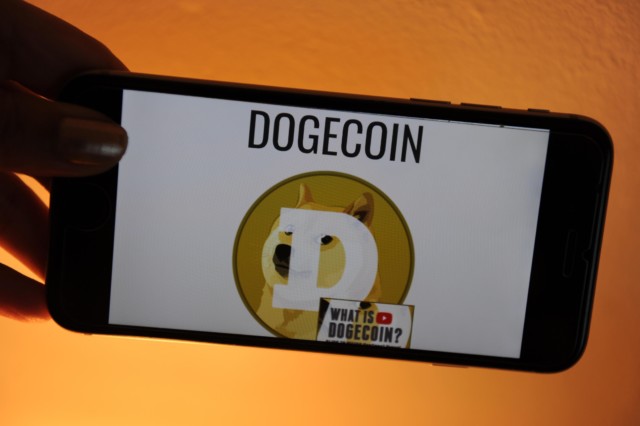 THE value of Dogecoin has dropped from earlier record highs.

But what is the cryptocurrency and why is it dropping? We explain what you need to know.

Follow our cyptocurrency live blog for the very latest news on Bitcoin, Dogecoin and market surges…

But first, a word of warning: buying cryptocurrencies as well as stocks and shares is a risky business.

Investing is not a guaranteed way to make money, so make sure you know the risks and can afford to lose the money.

Cryptocurrencies are also highly volatile, so your cash can go down as well as up in the blink of an eye.

Dogecoin is a cryptocurrency which was launched in 2013.

Originally invented as a joke by software engineers Jackson Palmer and Billy Markus, the Dogecoin has the image of a Shuba Inu dog as its logo.

It has been marketed as the “fun” version of bitcoin.

Two weeks after its launch, the value of it jumped 300% after China banned banks from investing in cryptocurrencies, according to Investopedia.

Dogecoin then skyrocketed alongside other cryptos during the bubble that peaked in 2017, and it fell with the rest of them over 2018.

At its height, Dogecoin was trading for $0.018 per coin, according to crypto data firm CoinMarketCap.

Why is the value of it going down?

At its height on February 7, Dogecoin was trading for $0.085 6.1p) per coin, according to crypto data firm CoinMarketCap.

Other famous people including Snoop Dogg and investor Mark Cuban; have also tweeted their support of Dogecoin.

That was off the back of a bunch of Reddit threads calling for it to hit a value of $1 per coin.

The target was an attempt to mirror the recent share surge in heavily shorted companies like GameStop.

The value of Dogecoin started surging at the end of January

Shares in GameStop soared by a staggering 700% earlier in January.

But for the amateur traders, the surge saw them make some serious cash.

In simple terms, “short selling” is when professional investors borrow shares of stock to sell, and then buy them back at a lower price.

Essentially, they are betting that the stocks will drop in value so they can pocket the profit when they hand them back to the company they borrowed them from.

They rely on the company failing, which makes it a risky way of raising cash.

To prove a point, the Reddit community called WallStreetBets decided to take on the hedge fund by buying up GameStop stock as quickly as possible, driving up share prices.

But the hedge fund still needed to return the borrowed stock so it ended up buying back the shares at a hugely inflated price, costing them billions.

This made the price soar even more. The GameStop losses caused the hedge fund to go bust.

One thread, titled “Dogecoin is the next GME/Bitcoin” (GME is GameStop), said getting Dogecoin to $1 a coin would be “an incredible achievement”.

It added it would “completely change the crypto market… Dogecoin to the moon.”

Dogecoin also received a boost after it was tweeted by an account called “WSB Chairman”, which insists it isn’t associated with the Reddit group.

Plus, the cryptocurrency has attracted the attention of Tesla founder Elon Musk recently, sending the value soaring in December.

Brits are being warned they risk losing all of their money if they invest in bitcoin and other cryptocurrencies.

It comes after a ban on some crypto-related investment products.

We reveal how someone who starts investing £78 a month at the age of 22 could have more than £1million if they keep it up until they turn 65.

Prince Andrew given massage in Buckingham Palace bedroom while naked under towel by masseuse...

Emmerdale spoilers: Mack and Charity grow closer as they team up on crime spree