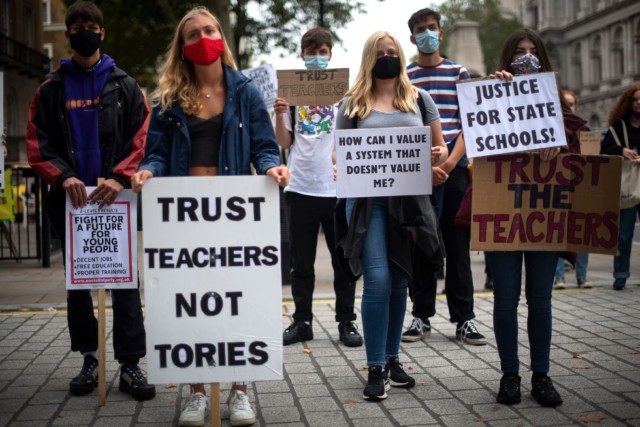 HUNDREDS of thousands of A-level and GCSE grades which were generated by computer algorithms will be ditched and replaced with teachers’ predicted marks.

Boris Johnson gave in to mounting pressure from parents, pupils and his own MPs and scrapped the whole system just days after it was put in place.

A-Level students have been in uproar over their grades

What has been announced?

A-levels and GCSEs in England will be awarded based on the “centre assessment grades” from teachers, the government has said.

The U-turn from the exams regulator comes after days of criticism by students, teachers, and cross-party MPs over the controversial system for awarding results.

About 40% of A-level results were downgraded after the exams regulator Ofqual used an algorithm based on schools’ previous results.

The move follows a similar announcement by the Welsh government earlier this afternoon.

What did Gavin Williamson say?

Education Secretary Gavin Williamson said: “This has been an extraordinarily difficult year for young people who were unable to take their exams.

“We worked with Ofqual to construct the fairest possible model, but it is clear that the process of allocating grades has resulted in more significant inconsistencies than can be resolved through an appeals process.

“We now believe it is better to offer young people and parents certainty by moving to teacher assessed grades for both A and AS level and GCSE results.

“I am sorry for the distress this has caused young people and their parents but hope this announcement will now provide the certainty and reassurance they deserve.”

What did Chair of Ofqual Roger Taylor say?

Roger Taylor, Chair, Ofqual said: “We understand this has been a distressing time for students, who were awarded exam results last week for exams they never took. The pandemic has created circumstances no one could have ever imagined or wished for. We want to now take steps to remove as much stress and uncertainty for young people as possible – and to free up heads and teachers to work towards the important task of getting all schools open in two weeks.

“After reflection, we have decided that the best way to do this is to award grades on the basis of what teachers submitted. The switch to centre assessment grades will apply to both AS and A levels and to the GCSE results which students will receive later this week.

“There was no easy solution to the problem of awarding exam results when no exams have taken place. Ofqual was asked by the Secretary of State to develop a system for awarding calculated grades, which maintained standards and ensured that grades were awarded broadly in line with previous years. Our goal has always been to protect the trust that the public rightly has in educational qualifications.

“But we recognise that while the approach we adopted attempted to achieve these goals we also appreciate that it has also caused real anguish and damaged public confidence. Expecting schools to submit appeals where grades were incorrect placed a burden on teachers when they need to be preparing for the new term and has created uncertainty and anxiety for students. For all of that, we are extremely sorry.

“We have therefore decided that students be awarded their centre assessment for this summer – that is, the grade their school or college estimated was the grade they would most likely have achieved in their exam – or the moderated grade, whichever is higher.

“The path forward we now plan to implement will provide urgent clarity. We are already working with the Department for Education, universities and everyone else affected by this issue.”

Will GCSE results be released on August 20?

GCSE students are set to receive their results on August 20 – despite them missing exam season.

Results day will not be delayed despite fears it would be.

Did you miss our previous article…
https://www.hellofaread.com/politics/who-is-alex-salmonds-wife-moira/