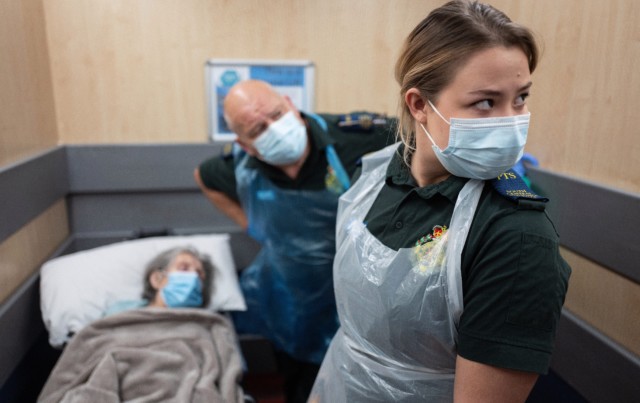 AGENCY staff spread coronavirus between care homes in the early days of the pandemic, a leaked report has claimed.

In some cases, the agency staff had been brought in to cover for staff who were self-isolating to prevent the vulnerable people they looked after from becoming infected.

The paper reported the study was conducted over the Easter weekend in April, but the details were only circulated to care home providers, councils and local directors of public health last week.

The workers will be compensated and paid to make sure they don’t lose out by stopping some work.

More than 22,000 care home residents are estimated to have died in England and Wales, with Prime Minister Boris Johnson admitting there had been “an appalling epidemic in care homes”.

12,000 official deaths have been recorded so far – both inside and outside hospital.

Everyone in care homes will be tested for the virus by the end of June, Mr Hancock said last week.

And anyone going from hospital into a home will also get a test.

However, this changed from the start of the pandemic, and many residents were sent back to homes after hospital spells, without knowing they were virus free.

Many care homes have banned visitors since March, but the staff working in care homes are feared to have played a big part in the spread of the bug. A DHSC spokesman said: “We are working around the clock to make sure care homes, and our frontline social care workforce, are getting the support they need to protect their residents and tackle coronavirus.

“Our help to care homes, which includes financial support, infection control training and supplies of PPE, has meant that two thirds of England’s care homes have had no outbreak at all.”

Meanwhile, an association of care homes in the north east has sent a legal warning to their local council over fears the sector could collapse without any additional support, it has been reported.

Sky News said that a letter had been sent from Care North East – which represents 21 care homes – to North Tyneside Council advising that if action was not taken to provide funding and support within five days the area’s care market will start to collapse.

Love Island fans spot very rude ‘clue’ in the villa that S7 will be...

Hollyoaks Sylver managed to father secret daughter Cher while he was in PRISON reveals...