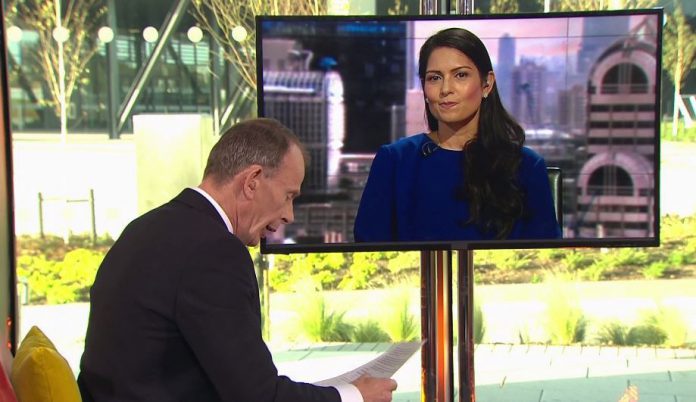 Mr Marr dressed down the Tory MP live on air as she defended Boris Johnsons tough tactics regarding negotiations with the EU.

The pair clashed as the veteran politics presenter listed industry groups who were concerned about their futures after we leave the bloc.

Reeling off the bodies – which included those from the chemical, food and aerospace sectors – he said they had discussed serious risks about consumer food safety, innovation and investment.

However, he stopped mid-flow to admonish the smirking Home Secretary who was interviewed by video link – fuming: I can’t see why you are laughing.

Despite the rebuke, Ms Patel remained unflustered and continued with her answer.

She said: This is why the government has been working assiduously with business as well I should say across a range of sectors when it comes to planning for our exit from the European Union.

That is vital, thats very important, and many of those organisations, Andrew, that you yourself have listed have been part of those discussions…

I do take issue with the way in which you phrased that, because as a government we have a duty to work with those sectors, with those organisations, and were doing that.

Remainers on Twitter said the Home Secretarys behaviour was symbolic of No10s lack of preparation for life after leaving the EU.

Labour MP David Lammy wrote on Twitter: Priti Patel is reminded of her own government’s analysis of the disastrous impact of Boris Johnson’s proposed Brexit.

She replies: I don’t know which data you’re quoting.

With people’s jobs and livelihoods on the line, this is unforgivable #Marr.

The Home Secretary also said the Government has been stepping up security measures in preparedness for a possible no-deal Brexit.

She said it was looking at “alternative arrangements” for intelligence and data sharing, but denied it feared an upsurge of Irish republican terrorism in the event of no-deal.

“That is not the case at all,” she told the BBC’s Andrew Marr Show.

“We have been working on that over the last three months.

She added: “When it comes to security tools and security co-operation there are many measures that are being put in place right now in preparedness for no-deal. Those include a range of security tools that we have been working on.

“Specifically to Northern Ireland, we are very conscious and we are working with all organisations, agencies to ensure that we remain safe.”

Ms Patel also played down suggestions that Anne Sacoolas could be extradited from the US over the death of 19-year-old Harry Dunn in a road accident.

Asked by Mr Marr if Ms Sacoolas could now be extradited to the UK, Ms Patel said: “The Foreign Secretary has been working with his American counterpart, he has been in touch with the US administration on this.

“It very much seems that the lady in question wants to start co-operating with the discussions and the investigations and I think that we should support that.

“We need to ensure that justice is done but obviously that co-operation with this investigation takes place. That is absolutely right.”