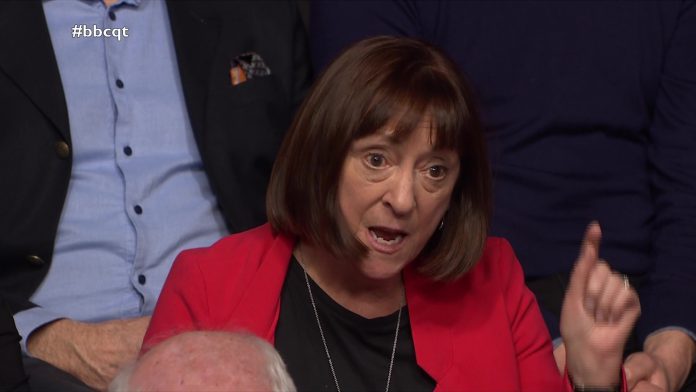 THE BBC has been blasted bias as an I, Daniel Blake star appeared in tonight’s BBC Question Time for the second election debate of the campaign.

Kate, who plays DS Beckett on the long-running soap, received an astounding applause from the crowd with her tough question.

She asked: “You talk about the Lib Dems as a viable alternative to Labour of Tories.

“I’d just like to ask you that with 14million UK citizens living in poverty do you regret consistently voting with the Conservatives and in favour of harsh and uncaring benefits cuts.

“Is there any kinds of alternatives to the Conservative Party?”

The Lib Dem leader replied: “I absolutely recognise the issue that you are raising and the bottom line is there are far, far too many people in our country living in poverty and live is too hard.”

Many blasted the Beeb for being biased towards Labour.

One said: “I think that this audience is heavily biased towards Labour. If you look at the numbers cheering and clapping Corbyn it is more than half.”

Another said: “It is clear & obvious this audience including Fiona Bruce are favouring Labour Typical #BBC showing its bias all over again-Disgusting.”

But I think that this audience is heavily biased towards Labour. If you look at the numbers cheering and clapping Corbyn it is more than half. I dread to think what Boris will face in a few minutes time. Yet again BBC bias in audience selection.

Fiona Bruce was very quick to correct the student over leave uk being caught cheating. The bias from the bbc is pretty astounding. However should Labour move ahead in the polls I bet they change tack toute de suite

@bbcquestiontime are there any conservative voters in the audience in Sheffield? BBC bias again!

On Tuesday night, Mr Johnson and Mr Corbyn had their first head-to-head fight of the election.

Viewers didn’t appear to cry bias when it came to questions from the audience.

The pair spoke at lengths about Brexit, despite the Labour boss dodging questions about his personal position.

Mr Corbyn took a swing at the PM, claiming he was going to put the NHS up for negotiation in trade talks with the US after Brexit.

The PM hit back raging that he would never put the NHS at risk saying: “Under no circumstances whatsoever would any Conservative government put the NHS on the table! Our NHS will never be for sale.”

Mr Corbyn was laughed at by the audience when he claimed to tackle anti-Jew hate in the party.

Overall, viewers said Mr Johnson won the debate, according to a YouGov poll.

Who is Sinnise Fudge? Winter Love Island 2020 cast member and beauty consultant from...

EastEnders spoilers: Ben Mitchell proposes to boyfriend Callum Highway – but the policeman has...

Bake Off fans demand Alison Hammond is given a DAMEHOOD as she leaves viewers...