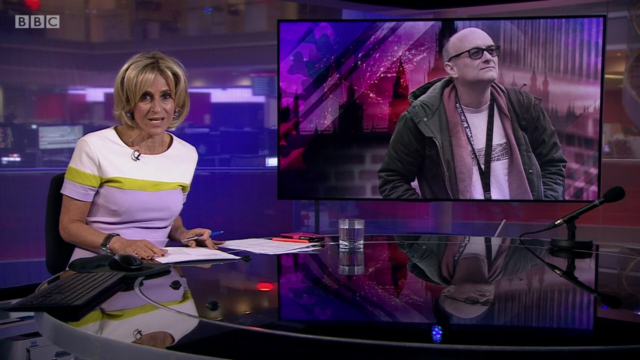 THE BBC has been bombarded with more than 40,000 complaints in only two days after Emily Maitlis broke the impartiality rule with a rant about Dominic Cummings.

The Newsnight presenter was swiftly reprimanded by the BBC who admitted she had crossed the line when reporting on the PM’s chief advisor “breaking lockdown rules”. The number of people writing to the BBC to lodge their anger at Ms Maitlis’ monologue about Mr Cumming’s trip to Durham doubled from 18,000 in 24 hours.

The BBC put out an apology the day after the controversial introduction to the program on May 26.

Ms Maitlis had told her Newsnight viewers that the Prime Minister was playing the country “for fools” and accused him of blind loyalty to his adviser – which was putting Government messaging on coronavirus at risk.

A statement the broadcaster put out on twitter said: “The BBC must uphold the highest standards of due impartiality in its news output.

“We’ve reviewed the entirety of last night’s Newsnight, including the opening section, and while we believe the programme contained fair, reasonable and rigorous journalism.

“We feel that we should have done more to make clear the introduction was a summary of the questions we would examine, with all the accompanying evidence, in the rest of the programme.

“As it was, we believe the introduction we broadcast did not meet our standards of due impartiality.

“Our staff have been reminded of the guidelines.”

According to the MailOnline, just over 20,000 people who complained thought Ms Maitlis had not been impartial, and just under 20,000 were angry at the BBC’s statement.

Some complaints have not been categorised yet.

Media watchdog Ofcom said it had received 366 complaints over the broadcast.

Despite the stampede of complaints, Ms Maitlis said she had been “overwhelmed” by kind messages from fans.

She wrote on twitter: “Been overwhelmed by all the kindness, messages – and support on here – and I’ve probably missed much of it”

Rumours swirled earlier this week that Ms Maitlis had been kicked off the air, and a colleague asked to step in for the following nights program.

But Ms Maitlis insisted she had asked her colleauge Katie Razzall to fill the spot for her.

Ms Razzall took to twitter to clarify the reason for filling in: “Just for the record, Emily @maitlis has not been asked by the BBC to take tonight off – and if I thought she had been, I certainly wouldn’t have agreed to present the show.”

She did not address Ms Maitlis’ absence as she opened the programme yesterday evening.

And later Ms Maitlis herself tweeted: “So grateful to my friend and excellent colleague @katierazz for stepping in this evening. And she thanked fans for their support Another BBC presenter, Andrew Marr, has also been the subject of more than 1,000 messages to the broadcaster from viewers after he grilled Transport Secretary Grant Shapps over the Dominic Cummings row.

The Newsnight presenter’s position on the row sparked fury from MPs.

Tory grandee Iain Duncan Smith slammed Ms Maitlis’ comments, and warned it was not the job of presenters to offer a personal opinion.

He told HOAR: “It’s quite wrong of an interviewer to express their own views using a platform they have been fortunate to get.

“The charter is very clear that the BBC is not to express its own personal opinions.”

Tory MP Michael Fabricant said: “The BBC is supposed to present news in an unbiased way without a personal commentary.

“Newsnight is meant to do just that: present news and interviews. Not the personal views of its presenters.

“The BBC seems to be losing all its values as a national public broadcaster.”

Former Labour MP and Brexiteer Kate Hoey added: “Understand that the BBC is being inundated with complaints about Emily Maitlis and Newsnight from last night.

“I have also put in a complaint and am sure many many more will #bbcbias”.

The comments also prompted a backlash from the public on social media.

Some labelled the broadcast “not fit for purpose”.

The BBC was urged to be neutral

One wrote: “What a totally disgraceful speech from Emily Maitlis and the BBC Newsnight editorial team.

“Ofcom need to step in because the BBC are clearly breaking their own charter. This in nasty and not at all unbiased or impartial.”

Another said: “This is a presenter’s opinion and using her position to give her viewpoint. We deserve as taxpayers to have impartial broadcasters.”

Boris Johnson has far refused to sack Mr Cummings despite a Tory civil war breaking out.

The PM again stood by his chief aide who is accused of twice breaking lockdown rules to travel with his family.

More than 40 backbench Tory MPs have also publicly called for the Vote Leave guru to step down.

Some have been spooked by polls showing the PM’s approval rating has plummeted by 20 per cent and that more than half of the public think Mr Cummings should quit.

A Savanta ComRes poll from earlier this week shows Mr Johnson’s rating has dropped to minus one.

The Government’s approval is down by 16 per cent.

And a YouGov poll shows 71 per cent of Brits say Mr Cummings did break lockdown and 59 per cent think he should resign. Dom Cummings leaves his home for work earlier this week Princess Eugenie beams and waves as she leaves hospital with new baby son and...

Over 160 terrorists released EARLY from prison in the last seven years, ex-minister reveals