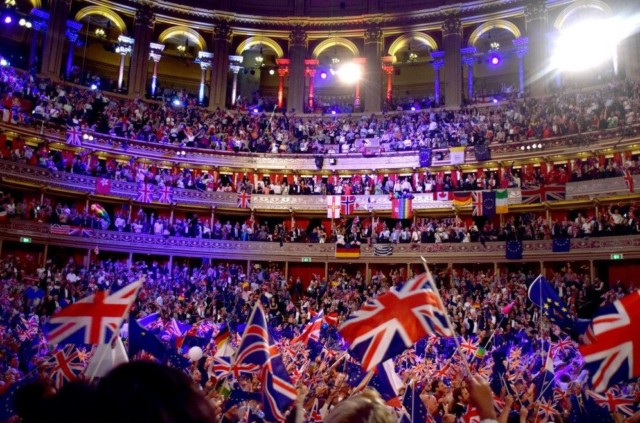 BORIS Johnson today hailed the BBC’s decision to U-turn and allow Rule Britannia! and Land of Hope and Glory to be sung at the Last Night of the Proms.

The Beeb scrapped the singing of the historic tunes over their perceived links to colonialism and slavery but reversed their decision after a public outcry.

Pleased to see common sense has prevailed on the BBC Proms

HOAR revealed at the weekend that the new BBC boss was considering a U-turn after the “terrible damage” to the corporation.

BBC director Tim Davie took over the helm from Lord Hall just days ago and is determined to undo the errors of his predecessor by setting a fresh tone.

Last week the PM had entered the row, too, by blasting the “cringing embarrassment” over Britain’s history.

Today the BBC finally backed down and said “both pieces will now include a select group of BBC singers”.

A statement from the Beeb added: “We have been looking hard at what else might be possible and we have a solution.

“This means the words will be sung in the Hall, and as we have always made clear, audiences will be free to sing along at home.”

It won’t be a full choir and there will be no audience due to Covid-19 fears.

But they added: “We are doing everything possible to make it special and want a Last Night truly to remember.”

The PM hailed the news today, with a spokesperson saying: “The PM made his view clear on this issue last week so he welcomes the decision.”

“People love our traditions and our history with all its imperfections. It’s crazy for us to go around trying to censor it.

“It’s absolutely absurd and I think we should speak out loud and proud for the UK and our history.”

He said: “Pleased to see common sense has prevailed on the BBC Proms.”

Actor Laurence Fox, who had been leading the campaign for the Beeb to u-turn, said: “WE BLOODY DID IT!

“You are all amazing! They have to listen if we speak loud enough. Well done. I’m so happy!”

And Brexit boss Nigel Farage said at the development: “This just shows the power of public pressure and how hopelessly out of touch the BBC are with their own licence fee payers.”

Sir Keir’s spokesman said: “It is the right decision, we said a few weeks ago the pomp and pageantry is a staple of the British summer.”

Robbie Moore MP said: “At last – a sensible conclusion from the BBC – and long may #RuleBritannia and #LandOfHopeAndGlory be sung at the #BBCProms.”

Brits reacted with delight, too.

Garry Bennett said: “Common sense at last. Was always going to happen after the outcry.

“Stupid BBC for even thinking nothing would be said…”

Nicola Moore added: “YES! Should never have had to have the debate in the first place.”

Jenny Clapton said: “So it should be! Absolutely ludicrous to try and stop it in the first place.”

It was reported yesterday that the new BBC chief had threatened to axe comedy shows for being too left wing.

Davie is reportedly set to axe a series of shows, and in his first speech on Thursday will try to restore “trust and confidence” in the BBC.

He’s also reported to be prepared to clamp down on presenters cashing in and working for private companies or hosting posh corporate events.

Davie is reported to be considering making corporation stars declare any outside earnings.

The corporation faced a huge backlash over the decision not to allow Rule Britannia to be sung at the Proms.

The Beeb said “artistic reasons” were behind its decision amid claims it acted over the song’s links to our colonial past.

But insiders had told HOAR: “Tim’s immediate priority will be to undo the terrible damage done by Tony.

“Tim has a chance to do a big, crowd-pleasing U-turn on a policy that is wildly unpopular.”

“Tim has already insisted on an announcement making clear that Rule Britannia will be sung at next year’s Proms.

“With Tony gone, he now has a chance to do a big, crowd-pleasing U-turn on a policy that is wildly unpopular.”

The ex-BBC chairman Michael Grade had also previously blasted the decision not to sing at the Proms, saying the corporation was “too trapped in the Westminster bubble” and has called everything wrong from the referendum to last year’s election.” Mel B reveals Spice Girls called her a ‘b***h’ after discovering she’d ‘lied’ to...

Coronavirus face masks for the public could ‘risk NHS shortage’

Inside No 10’s lockdown-breaking party where they ‘joked about being caught by DRONES and...