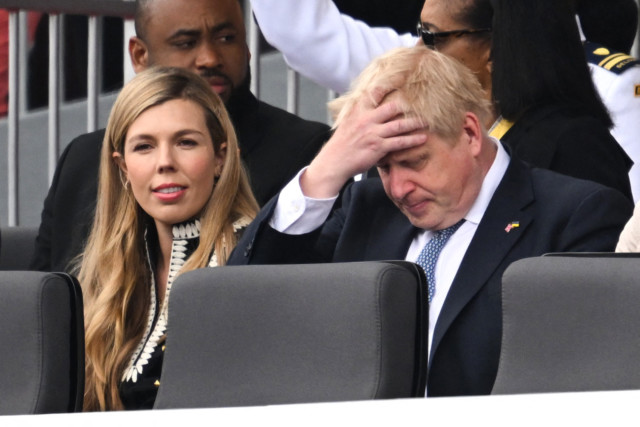 TORY donors who have given the party more than £18 Million in recent years today urged Conservative MPs not to ditch the PM. The letter seen by HOAR

It reads: “Yes, there are many challenges ahead. But wasting months of precious time on a leadership challenge would be foolish – and in our view, it would not be forgiven by the British people.

“This country needs leadership and answers now – and our Prime Minister is the best person to do that job.

“We need to let him get on with it. Business needs certainty and stability, so we need Boris Johnson to remain as our Prime Minister, and he has our unwavering support.”

Other names include multimillionaire financier Howard Shore and mega rich Simon Rueben – who alongside brother David is worth £16bn.

Their intervention came after backbench chief Sir Graham Brady announced this morning that at least 54 Tory MPs have submitted no confidence letters in the PM.

It triggers a dramatic secret ballot between 6 and 8pm later this evening in which Tory MPs will decide Mr Johnson’s fate.

The PM today vowed to fight tooth and nail to squash the revolt to stay in Downing Street and “draw a line” under recent woes.

No10 today said the PM relished the “chance to end months of speculation and allow the Government to draw a line and move on.”

A spokeswoman said: “The PM welcomes the opportunity to make his case to MPs and will remind them that when they’re united and focused on the issues that matter to voters there is no more formidable political force.”

He has also written to all MPs insisting it would be “destructive, decisive and distracting” to change leader now.

He will try to rally his troops later at a last gasp meeting of the 1922 committee at 4pm just hours before the vote. But if the size of the mutiny surpasses 180 MPs he will be kicked out of No10 and a fresh contest for the Tory crown will take place.

Disgruntled rebels seized on spectators booing the PM this weekend as he attended a Platinum Jubilee service at St Paul’s Cathedral.

A steady drumbeat of rebellion has been building since the Sue Gray report into Partygate was published last month.

A lack of action to tackle the cost of living crisis has also been cited as rebel causes for Mr Johnson to go.

Ex-Health Secretary Jeremy Hunt today became the most high profile rebel to stick the knife in as he revealed he will vote to ditch Boris.

In a stinging Twitter thread he blasted: “Anyone who believes our country is stronger, fairer & more prosperous when led by Conservatives should reflect that the consequence of not changing will be to hand the country to others who do not share those values.

“Today’s decision is change or lose. I will be voting for change.”

And John Penrose resigned as a government anti-corruption tsar, branding the confidence vote “the beginning of the end”.

However loyalists quickly formed a protective ring around the PM by declaring their support in tonight’s vote.

More than 50 Tory MPs including every Cabinet Minister rowed in behind their leader.

Likely leadership runner Liz Truss was quick out of the blocks to declare her “100% backing”.

Chancellor Rishi Sunak added: “From the vaccine rollout to our response to Russian aggression, the PM has shown the strong leadership our country needs.”

Treasury chief Simon Clarke piled in: “I will be voting confidence in our Prime Minister Boris Johnson.

“He honoured the wishes of the British people and delivered Brexit when no other major politician would or could have.

“Since then he has led us through Covid, delivering the fastest vaccine roll-out.”

Speaking live from Westminster this morning, Sir Graham said he told the PM of the imminent leadership contest yesterday.

He revealed some plotters had post-dated their letter so it did not ruin the royal celebrations.

The 1922 chair said: “Some colleagues asked it should not be until the end of the Jubilee.”

Jittery MPs fear the PM is not the electoral superstar who won a landslide in 2019 and worry they will lose their seats if he leads the party into the next election.

A brutal briefing being shared warns the PM “is no longer an electoral asset and, if left in post, will lead the Party to a substantial defeat in 2024”.

They fear 160 Tory MPs could lose their seats with Boris still in No10 turning a “defeat into a landslide”.

“MPs are having to defend the indefensible, not for the sake of the party, but for one man.”

Mr Johnson has apologised for Partygate and begged the nation to move on so he can focus on the cost of living crisis and Ukraine.

From Dublin to Rome — cheap hotels and bargain booze as prices for city...

Schools will have access to rapid 90 minute coronavirus tests to help get kids...