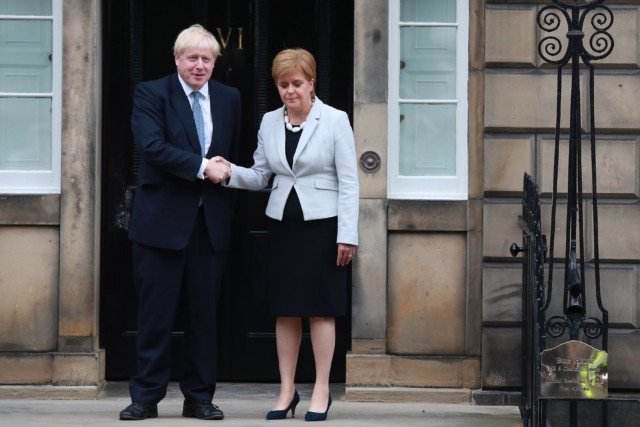 BORIS Johnson will spend billions of pounds on Scottish infrastructure in a desperate bid to save the Union.

The PM is set to unveil a strategy to fight Nicola Sturgeon and the SNP amid growing concerns that the party could call a new independence referendum following next week’s election.

Plans could include a spending spree on Scottish road and rail links as well as student exchanges between UK nations, the Sunday Telegraph reports.

Matt Hancock, the Health secretary, is also working on plans to treat Scottish patients in English hospitals to tackle a huge backlog caused by the coronavirus pandemic.

It comes amid fears that nationalists could win a majority in the Scottish Parliament next week – and call a referendum without the consent of the British government.

The SNP are expected to make large gains in Scotland with one senior government source warning the result could be “bloody awful”.

Another minister told the Telegraph the nationalists saw the parliamentary election as “a referendum on a referendum”, adding: “There is no room for complacency.

“We are in a bare knuckle fight.”

Meanwhile, another Tory source urged Scots to prioritise voting for unionist parties – regardless of whether they were Labour, Lib Dem or Conservative.

It is hoped that, should the SNP fail to win a majority of the vote, the case for unilaterally calling a second referendum would collapse.

Michael Gove, the cabinet office minister, has been put in charge of a special Downing Street unit tasked with saving the Union.

Did you miss our previous article…
https://www.hellofaread.com/politics/priti-patel-vows-to-step-up-crackdown-on-extremist-climate-change-vandals/

How to enter the Platinum Jubilee Pageant

Britain’s Got Talent judges David Walliams and Alesha Dixon in astonishing bust-up over his...

Full list of benefits to get £10 Christmas cash bonus – will you get...