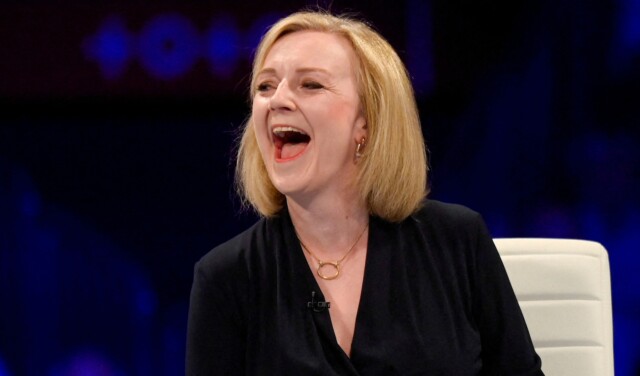 LIZ Truss was handed another boost to her thundering PM campaign today as a pack of top Tories declared their support.

Eleven Conservative whips came out back the Foreign Secretary en masse in a blow to Rishi Sunak’s underdog bid for leader.

Rishi Sunak insists he is still fighting for every vote

Three Tory MPs have already jumped ship from the former Chancellor to Ms Truss as she looks set to sweep into No10.

A Truss campaign source trumpeted: “Day in day out, more and more members of the Parliamentary Party are realising that Liz is the only candidate who can unite the party and beat Keir Starmer in 2024.”

Team Sunak shot back that he has the backing of Tory “titans” after several grandees including Nigel Lawson and William Hague backed him.

But today the bookies slashed the chances of her thumping Mr Sunak in a landslide victory, giving her 6/4 odds on winning a whopping 60 per cent of Tory members.

Betfair now has her at a seemingly unassailable 91 per cent chance of winning compared to Mr Sunak’s lowly 9 per cent.

Mr Sunak insists he is still “fighting for every vote” as the two candidates head to Scotland for the latest round of hustings.

Both are expected to pitch themselves as the best hope to save the Union from Nicola Sturgeon’s hell-bent drive for independence.

An awkward poll today found neither of the candidates commanded the nation’s confidence to fix the most pressing issues.

Ms Truss was the preferred option to deal with law and order, education and levelling up, while Mr Sunak scored highest on the economy and tackling the cost of living.

However both were deep in negative territory across the board, as was Boris Johnson, who scored highest on delivering Brexit and beating Covid.

Fifa 22 LIVE – Ones to Watch released early plus cheapest place to buy...