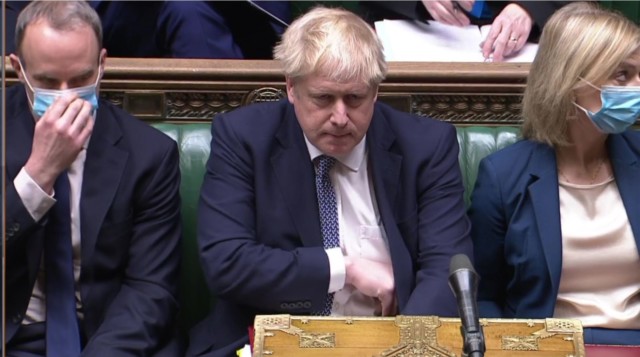 BORIS Johnson today admitted he WAS at the No10 lockdown drinks party for nearly half an hour.

The PM was branded “pathetic” and faced calls to resign today as he finally faced the music after hours in hiding.

After 24 hours of chaos and questions the PM finally broke cover to issue a grovelling apology – and said he regretted not telling everyone to stop and go home.

BoJo told MPs: “I certainly wish that things would have happened differently on the evening of May the 20th and I apologise for all the misjudgements that have been made, for which I take full responsibility.”

Mr Johnson emerged this lunchtime to an onslaught coming from all sides – including enraged Tories already sharpening their knives and some saying they are ready to see him quit.

He was forced out of hiding for his weekly Commons duel with Sir Keir Starmer this lunchtime where he’s fighting for his political survival.

Before their clash the PM got on the front foot with a humbling statement addressing the fury.

Mr Johnson said: “I want to apologise. I know that millions of people across this country have made extraordinary sacrifices over the last 18 months.

“I know the anguish that they have been through, unable to mourn their relatives, unable to live their lives as they want to do the things they love.”

His premiership was plunged into crisis this week following bombshell revelations that a booze bash was held in the No10 garden during the first lockdown.

But 18 months after the May 20, 2020 booze-up the PM is now suffering the hangover from hell as a Whitehall probe threatens to strike a devastating blow.

Just an hour earlier a Cabinet Minister had told the public at a press conference to follow the rules by only meeting one other person outside.

After a string of hypocrisy accusations – that started more than a year ago with Dominic Cummings’ Barnard Castle trip – the PM is now on the ropes.

Emmerdale spoilers: Sam Dingle struggles to cope in lockdown as Lydia ventures out