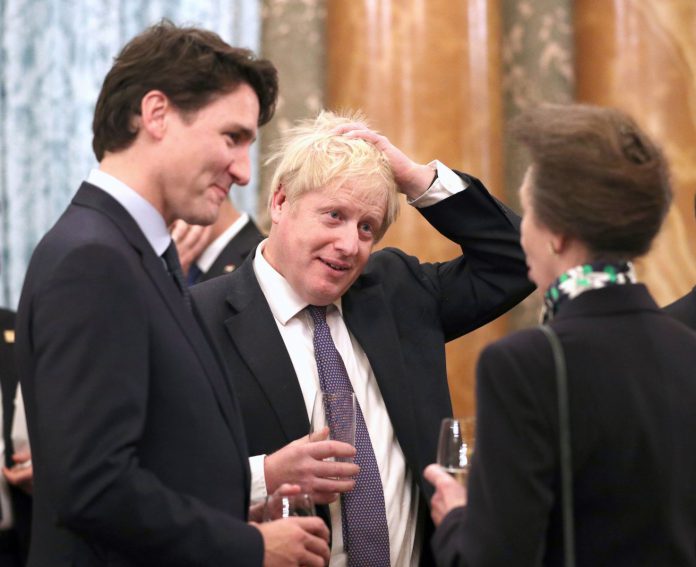 BORIS Johnson has arrived at Buckingham Palace to welcome Donald Trump and Nato leaders around the world.

The US President landed in London last night for a meeting of world chiefs, and is now enjoying a whirlwind tour of meetings with world leaders and Royals.

Several Nato leaders including France’s Emmanuel Macron and Germany’s Angela Merkel are in town to celebrate 70 years of the historic alliance, which keeps millions of people around the world safe.

The Queen will tonight host them at Buckingham Palace for a reception, before they go onto No10 for more discussions.

The US leader has previously boasted of his amazing relationship with Her Majesty.

Speaking earlier this year, he said: I have such a great relationship, and we were laughing and having fun.

“And her people said she hasn’t had so much fun in 25 years.

Then I got criticised for it because they said we were having too much fun.

His last visit sparked a flurry of controversy after he suggested Prince Charles now backs Brexit.

But the US President said it was “pretty hard” for royals to speak their true feelings about politics as they had to stay neutral.

His trip has already seen the former reality host lay wade into the election, dismissing claims by Labour the US is interested in the NHS.

In a blow for one ofJeremy Corbyn’s main election attacks, Mr Trump claimed he wouldn’t take the health serviceeven if it is on a silver platter.

The US President said he “didn’t even know where the rumour came from”.

Mr Trump has also insisted he is still “a fan of Brexit”, but didn’t rule out working with a Corbyn government.

He said he “didn’t want to complicate” the election by giving his thoughts on British politics.

“I’ve won a lot of election for a lot of people,” he said.

“This is a different country.”

But he admitted that “I can work with anybody” and claimed he was a “very easy person to work with”.

“You know I was a fan of Brexit, I called it, the day before.

“I think Boris is very capable and I think he’ll do a good job.”

Boris Johnson warns ‘we’re not out of the woods yet’ amid rising fears over...

Love Islands Finn Tapp grosses out viewers as he blurts out he has a...