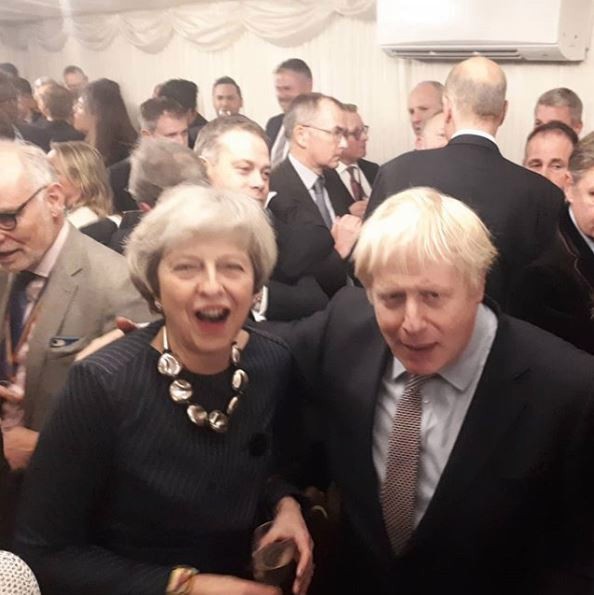 Boris Johnson and Theresa May were fast friends again last night, after hugging it out to celebrate the Conservatives massive election victory.

Mr Johnson and his predecessor were all smiles at a party for the newly elected Tory MPs, and were seen putting their differences aside in a hug for the ages.

But all of that was water under the bridge as they enjoyed the historic moment for the Conservatives with some of the MPs who took down the Labour heartlands and became the “blue wall”.

Mr Johnson was seen wrapping his arm around Mrs May’s shoulder, who was jubilant, glass of champagne in hand.

The party was in celebration of the Tory MPs who stole Labour seats such as Blyth Valley and Bishop Auckland, which have never voted in a Conservative candidate, and delivered Boris Johnson his thumping 80-seat majority.

Mr Johnson was a constant opponent to Mrs May as she tried to push her Brexit deal through the House of Commons time and time again.

She was eventually forced to resign by Mr Johnson and Brexiteer MPs who refused to support her deal.

Mr Johnson publicly slammed Mrs May’s deal, saying “it is is not that we have failed, but that we have not even tried” and quit as foreign secretary in her cabinet in defiance of the then-Prime Minister.

Even in Mrs May’s last interview as PM, she was still in the ring with Boris, suggesting he was only after power.

Mrs May’s decision to call a snap-election in 2017 lost the Conservative Party their majority in Parliament and caused much of the chaos and deadlock Mr Johnson has railed against.

It was an election Mr Johnson described as “the most incompetent election campaign in modern times”.

The two have been at each other’s throats since 2015 in a row over water cannons.

Then London Mayor, Mr Johnson splurged more than 200,000 on German anti-protester water cannons, Mrs May, then Home Secretary shut him down in Parliament.

They were head to head again as Mr Johnson publicly humiliated and defied Mrs May by questioning the government’s commitment to expand Heathrow Airport.

In the wake of David Cameron’s resignation, the two went toe to toe again for the Conservative leadership, but backed down and was given foreign secretary as the conciliation prize.

Mrs May eventually urged MPs to back Mr Johnson’s Brexit deal before it was defeated in parliament.

My sexy Scott became a pathetic coke addict because of me, said Barbara Windsor

Nicola Sturgeon says sorry to women ‘failed’ as she fights for her career in...

Strictly bosses hunt for mole who leaks which celeb is voted off before results...