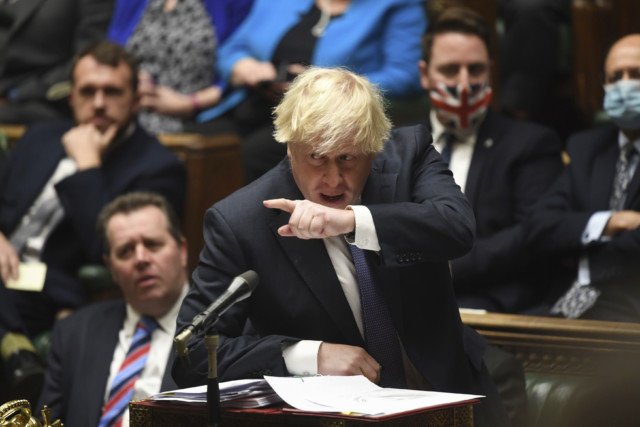 BORIS Johnson was yesterday forced to fight back on multiple flanks as he faced interrogation on sleaze, the Budget tax bombshell and crime.

He also had an awkward grilling by the female Tory who this week accused his father Stanley of smacking her backside at a party conference.

The PM, who’s also battling a sore throat, was already having a tough day after being scolded by raging Speaker Lindsay Hoyle at PMQs.

He finally admitted at the Liaison Committee of senior MPs he was “mistaken” for trying to save Owen Paterson.

Last night Mr Johnson – who’s now proposing a ban on second jobs as paid consultants – said: “I think it was a very sad case but I think there’s no question that he had fallen foul of the rules on paid advocacy as far as I could see from the report.

“The question that people wanted to establish was whether or not, given the particularly tragic circumstances, he had a fair right to appeal.”

Mr Johnson said: “In forming the impression that the former member for North Shropshire had not had a fair process I may well have been mistaken.”

In a meeting of MPs later the PM went further, admitting: “On a clear road, I crashed the car into a ditch.”

Mr Johnson also faced questions on last month’s Budget that whacked up taxes to their highest since the Second World War.

Along with eye-catching tax breaks for beer and wine, Rishi Sunak also sprayed billions at public services that come with a hefty tax bombshell.

He also cut the Universal Credit taper rate to 55 per cent, allowing millions of claimants to keep more of their money.

Tory MPs are nervous that taxes are so high, although the Chancellor says he wants to see them falling by the next election.

“And we had to look after people throughout the pandemic. And I think everybody understood the fiscal impact of that.”

Mr Johnson will also took questions from Tory MP Caroline Nokes during a part of the session on violence against women and girls.

But he slapped down her asks that hatred of women should become a crime, and insisted there were enough laws in place to protect women.

He told MPs: “I want to see proper enforcement of the law.”

Mr Johnson Senior insisted he had “no recollection” of the women and he had “no idea” what events they were talking about.

Ex-Cabinet Minister Ms Nokes this week accused the PM’s father Stanley of groping her at the 2003 Tory Party conference.

She told Sky News: “I can remember a really prominent man – at the time the Conservative candidate for Teignbridge in Devon – smacking me on the backside about as hard as he could and going, ‘oh, Romsey, you’ve got a lovely seat’.”

It prompted journalist Ailbhe Rea to also accuse Stanley of groping her at the 2019 Tory conference.

Last night Stanley told the Sun: “I have no recollection of Caroline Nokes, and no idea what she was talking about.”

And he added: “Had I been asked about the allegation made by the journalist of the New Statesman, I would have said the same thing.”

Downing St has so far refused to comment on the allegations. The PM bats off questions from senior MPs

Yellow warning for heavy thunderstorms & lightning that could damage buildings as Brits brace...

Stacey Solomon reveals Joe Swash is sick and confined to his bed amid coronavirus...

We partied all night with Liam Gallagher – but his very un-rock n roll...

We tested the best shampoos against market leader Pantene – and the winner costs...