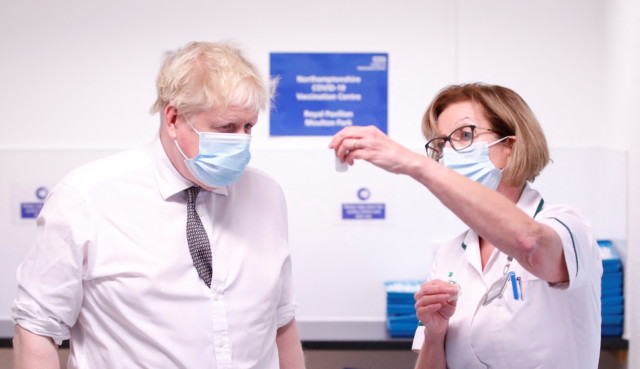 BORIS Johnson today lashed out at the “tragedy” of “mumbo jumbo” anti-vaxxers spouting “nonsense” online – as he warned the NHS is under “huge” pressure.

The PM insisted ministers were doing everything possible to make sure that the people most likely to get ill are getting vaccinated, as he again urged everyone to come forward and get jabbed now.

And he defended pouring more money into the NHS through the National Insurance hike planned for later this year – after one of his own Cabinet ministers urged him to consider ditching it over cost of living fears.

Boris today said he wanted people to “understand the pressures that omicron is causing” and “recognise the vital importance of a vaccination”.

In his strongest blast at anti-vaxxers yet, the PM lashed out at them for “putting this mumbo-jumbo on social media – they are completely wrong”.

But he insisted he had no plans to follow other nations and force people to get their vaccines, saying “we’re going to keep a voluntary approach”.

The PM said on a visit to Northampton today: “What a tragedy that we’ve got all this pressure on the NHS, with difficulties that our doctors and nurses are experiencing.

“And you’ve got people out there spouting complete nonsense about a vaccination, in that they are totally wrong.

“And I think it’s time that I, that government, call them out.

“What they’re doing is absolutely wrong, is totally counterproductive. And the stuff they’re putting out on social media is complete, mumbo jumbo.

“The NHS is under huge pressure.”

He stressed Britain would “get through this wave” but warned “the pressure on hospital is clear – we’ve got to give the health service all the help we can through the next period”.

Last night Jacob Rees-Mogg was revealed to have urged the PM to reconsider raiding Brits’ pockets later this year, over growing fears over the cost of living.

Stalling wages, soaring inflation and rising energy bills are set to whack Brits in the pocket within months.

And a National Insurance tax hike to help pay more towards the NHS and social care is on the cards to come in at the start of April too.

But this lunchtime the PM defended the levy, saying it was vital to bring it in to help tackle the huge backlog in the health system.

“The NHS is doing an absolutely extraordinary job in very difficult circusmatnces.

“The most important thing we can do right now as a Government is continue to support, to increase the support to our hospitals, our NHS staff.

“Making sure we have more doctors, nurses they need, that’s why we have invested massively through the Health and Social Care levy – that’s very, very important for the NHS to clear the backlogs, and enable them to deal with Covid.”

Hopes are rising Covid rules could be relaxed next month

Thanks to the booster rollout, the PM said the country will be in a stronger position to fight Omicron when Plan B measures expire in three weeks.

While infections hit 194,000 yesterday, ministers are encouraged by growing evidence that Omicron is far milder than previous strains.

They are also throwing the kitchen sink at the booster programme, which HOAR’s Jab’s Army campaign is helping to turbo-charge.

Cabinet yesterday agreed to extend Plan B until the end of the month when the regulations are due to expire.

Extending the measures into February risks a fresh rebellion with Tory backbenchers who last month dealt the PM the biggest revolt of his premiership.

Heading off another row, the PM insisted the booster programme provides a light at the end of the tunnel.

He said: “That doesn’t meant there won’t be further challenges but I think life will return to something much much closer to normality.

“It won’t be necessary to have the restrictions that we currently have in place.

“Business, investors, will have all the confidence that they need, but to be frank, you are already seeing a huge investments in this country because of the approach that we have taken.”

Follow our Covid live blog for all the latest updates

The PM yesterday all-but ruled out “shutting down our country again” with a full-fat lockdown.

But he stressed the return to normality hinged on hospitalisation numbers and said he’s put the NHS on a war footing.

He told MPs: “I am sorry to report that hospital admissions are rising rapidly, doubling around every 9 days, with already more than 15,000 Covid patients in hospital in England alone.

“We are experiencing the fastest growth in Covid cases that we have ever known, with over 218,000 cases reported yesterday, although that included some delayed reporting.

“And potentially of greatest concern, case rates are now rapidly rising among the older and more vulnerable, including doubling every week among those over 60, with the obvious risk that this will continue to increase the pressures on our NHS.”