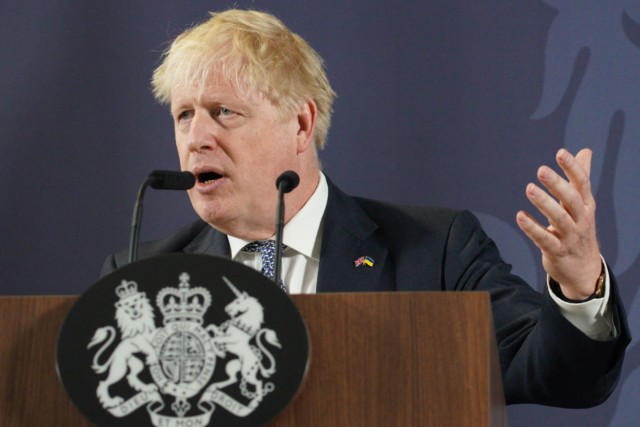 AT last Boris Johnson admits taxes are too high and “sooner or later the burden must come down”. How’s today looking, PM?

You may believe you cannot afford to cut them yet.

But look at what the Treasury now rakes in from the extortionate fuel prices drivers are forced to pay.

It’s more than when Rishi Sunak cut 5p off fuel duty — thanks to the Government’s increased VAT take as a litre soars over £2.

It’s rich of the Government to blame forecourt “profiteers” when the Treasury’s share is so outrageous.

Family budgets, firms and the overall economy are being wrecked by the eye-watering rise in petrol and diesel since the Ukraine invasion. Petrol prices near me: cheapest supermarket fuel prices and how to check

You could ease the pain now, PM.

Tell the Chancellor: Cut 10p off a litre today.

FOR years we have begged the Tories to fix our broken housing market. Boris’s speech yesterday was a serious attempt to do so.

But we are tired of promises that go undelivered, are buried by civil servants opposed to Tory rule or sidelined when the PM turns his attention elsewhere.

It will be a crying shame if it happens here.

Getting more first-time buyers on the ladder is essential for levelling-up and giving Generation Rent a genuine stake in the economy.

Extending Maggie Thatcher’s right-to-buy to Housing Association tenants is a great idea if each home bought is replaced by a new one.

So is increasing 95 per cent mortgages, instead of buyers needing impossibly vast deposits.

But the shortage of properties is a huge problem too. Why drop the 300,000 annual building target?

With our population rising by 330,000 a year we are barely standing still at our current level, let alone making a difference.

That said, this looks a decent blueprint for a property revolution.

Will it happen? Don’t bet the house on it.

IT says everything about William that, unannounced and as incognito as he can be, he stood on the street selling the Big Issue.

For all his privileges and trappings he has real compassion for the homeless.

Diana would be so proud.

IT is a welcome breakthrough that the Government has apologised for letting down disabled kids.

Also that Children’s Minister Will Quince seems to understand their plight. NOT IN MY YARD

But the real aim of our Give It Back campaign is to reinstate the £573million cut from their social care and support.

Your regrets are appreciated, Mr Quince. But money talks.

Did you miss our previous article…
https://www.hellofaread.com/politics/illegal-migrants-due-to-be-flown-to-rwanda-could-be-released-if-activists-win-court-bid/

BGT’s Alesha Dixon reveals she was in ‘floods of tears’ when Diversity performed controversial...

How to griddy: Perform all goal celebrations in FIFA 23