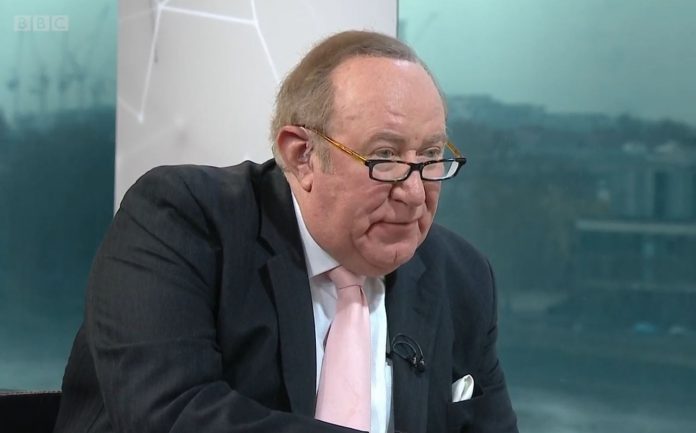 BBC’s Andrew Neil has challenged Boris Johnson again to an interview before next week’s general election.

The broadcasting behemoth fired the challenge at the Prime Minister tonight during his interview with Brexit Party leader Nigel Farage.

Mr Johnson is the only leader of the four main parties yet to sit down with Neil for a 30-minute grilling during prime-time on BBC One – the PM has suggested he is willing to.

The political presenter said tonight: “It is not too late. We have an interview prepared. Oven-ready, as Mr Johnson likes to say.”

Mr Johnson is yet to confirm his agreement to face a grilling by Mr Neil as aides continue to wrangle with the Beeb.

Tory sources said have said talks were ongoing, almost a week after Jeremy Corbyn faced the tough questioning from the BBC veteran.

A senior Tory source told HOAR this week they were still “in discussions” with the BBC about a possible Andrew Neil interview.

Neil tonight addressed the PM directly at the end of his fourth leader interview with Mr Farage.

He said: “The theme running through our questions is trust – and why at so many times in his career, in politics and journalism, critics and sometimes even those close to him have deemed him to be untrustworthy.

“It is, of course, relevant to what he is promising us all now.

“Leaders’ interviews have been a key part of the BBC’s prime-time election coverage for decades.

“We do them, on your behalf, to scrutinise and hold to account those who would govern us. That is democracy.

“We have always proceeded in good faith that the leaders would participate. And in every election they have. All of them. Until this one.”

But Boris appeared to signal his support for an interview with Neil on the Andrew Marr Show on Sunday.

He said: “I am perfectly happy to be interviewed by any interviewer called Andrew from the BBC, and we will make sure that [happens].”

He’s so far dodged questions on whether he will appear.

Both Mr Corbyn and Nicola Sturgeon have already had a fierce interview with the presenter.

The leftie boss was skewered by Mr Neil in a half an hour pummelling, and Labour figures are furious that Boris might not face the same treatment.

Mr Corbyn said today Labour were “monitoring” TV coverage carefully to make sure it was fair.

Nigel Farage and Jo Swinson are scheduled to do theirs this week.

When will Call of Duty Warzone Season 4 be released? Start time and date

Coronation Street fans work out who murdered Charlie Walter – and it’s NOT Stu...