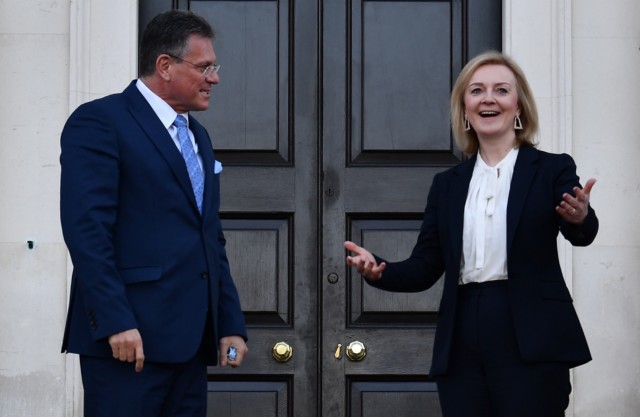 BORIS Johnson is at loggerheads with Liz Truss as he tries to wind back tensions with the EU over post-Brexit trade rules.

The PM is demanding calm heads as he seeks meaningful dialogue with the EU over the hated Northern Ireland protocol.

Amid fears the Foreign Secretary is seeking a battle with Brussels, fingers are being pointed at her department after plans for legislation to address the stalemate were leaked — with one source calling the move “petulant”.

A senior official said: “The object of the exercise with some people seems to be to have a fight.

“The object of the exercise for the Prime Minister is to restore democratic processes to Northern Ireland.”

Allies of Ms Truss hit back, insisting she is “focused on preserving peace in Northern Ireland and protecting the integrity of the United Kingdom — which is ultimately what’s at stake”. Britain has ‘no choice’ but to rip up Northern Ireland protocol, Liz Truss says Mr Johnson will use a showdown with party leaders in the province tomorrow to stress “we’ll always keep the door open to genuine dialogue”.

And he will make it clear the Government has never suggested scrapping the protocol entirely as there will always be a need for a treaty to prevent a hard border.

But Sinn Fein and the Democratic Unionist Party representatives will be told that “there will be a necessity to act” if the EU does not back down.

However, Sinn Fein last night accused the PM of being “in cahoots” with the DUP to block the formation of a new Executive and Assembly.

Party president Mary Lou McDonald said he was using the DUP in a “game of brinkmanship” with the EU.

Did you miss our previous article…
https://www.hellofaread.com/politics/london-mayor-sadiq-khan-pushes-ahead-with-review-into-legalising-cannabis/

I’m absolutely furious after neighbour erected a 20ft ‘rollercoaster’ at the bottom of our...

New Zealand lashes out at UK for failing to secure ‘enormous opportunity’ of post-Brexit...

EastEnders Linda Carter in for dark and dangerous Christmas as shes in denial over...

EastEnders star breaks down in floods of tears as she feels ‘helpless and emotionally...