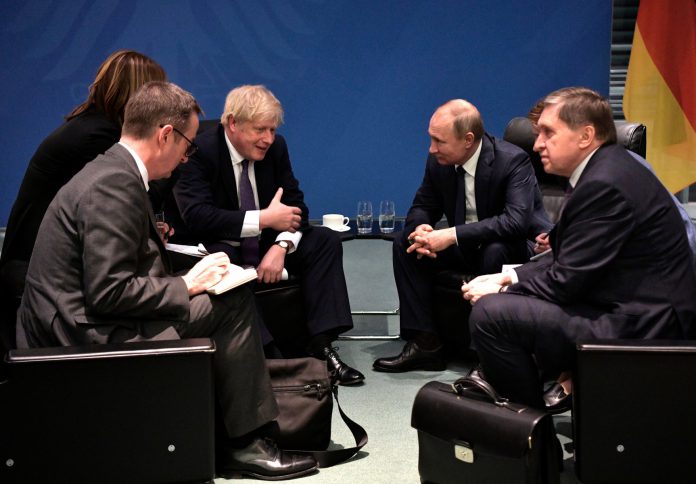 BORIS Johnson has revealed Britain could help peace keep in Libya if a lasting ceasefire in the bitter civil war is struck.

The PM made the offer as he joined 11 other world leaders at an emergency summit in Berlin to try to halt a new massacre in the North African country.

While there, Mr Johnson also warned Russian leader Vladmir Putin that relations will remain frozen while his country remains a threat.

The talks were called by German Chancellor Angela Merkel in a bid to strike a peace deal and halt the war-torn nations capital being overrun by Russian-backed rebel leader General Khalifa Haftar.

Quizzed on whether there could be a new role for British forces in Libya, the PM said: If there is a ceasefire, yes of course, theres a case for us doing what we do very well, sending people, experts to monitor the ceasefire.

I dont see any ceasefire at all at the moment. Thats what we are arguing for today.

But No10 officials insisted the effort would be lead by stabilisation teams from the Foreign Office and the number of UK troops would be low.

Boris also slammed the outside forces of Russia, Egypt and Turkey for fuelling what he dubbed was a proxy conflict.

He added: Proxy conflicts only come to an end when the external proxies decide they want to bring it to an end.

Britain and France helped topple Libyas despot leader Colonel Gaddafi in 2011 but since then the country has been locked in a bloody civil war waged by militia groups against the UN-backed government in Tripoli.

During a ten-minute meeting with Mr Putin in the conferences side lines, Mr Johnson told him there would be no normalisation of our bilateral relationship until Russia ends the destabilising activity that threatens the UK and our allies.

A No10 spokesman added: He was clear there had been no change in the UKs position on Salisbury, which was a reckless use of chemical weapons and a brazen attempt to murder innocent people on UK soil.

He said that such an attack must not be repeated.

The short meeting was the two leaders first since Boris took power six months ago.

Mr Johnson held talks with French President Emmanuel Macron on the margins of a summit in Berlin addressing the situation in Libya.

Ferry firm handed multi million-pound contract from the Government despite having no ships has...