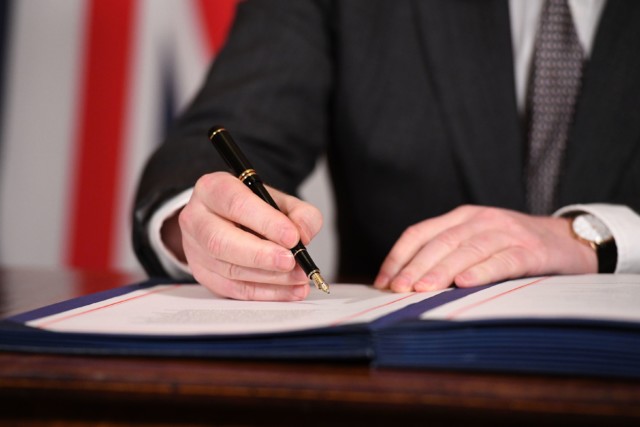 BORIS Johnson tonight declared his Brexit deal allows the UK to have its cake and eat it — after MPs overwhelmingly backed it in a historic Commons vote.

They ended years of wrangling over Europe by voting 521 to 73 in favour of the PM’s last-ditch Brexit deal. 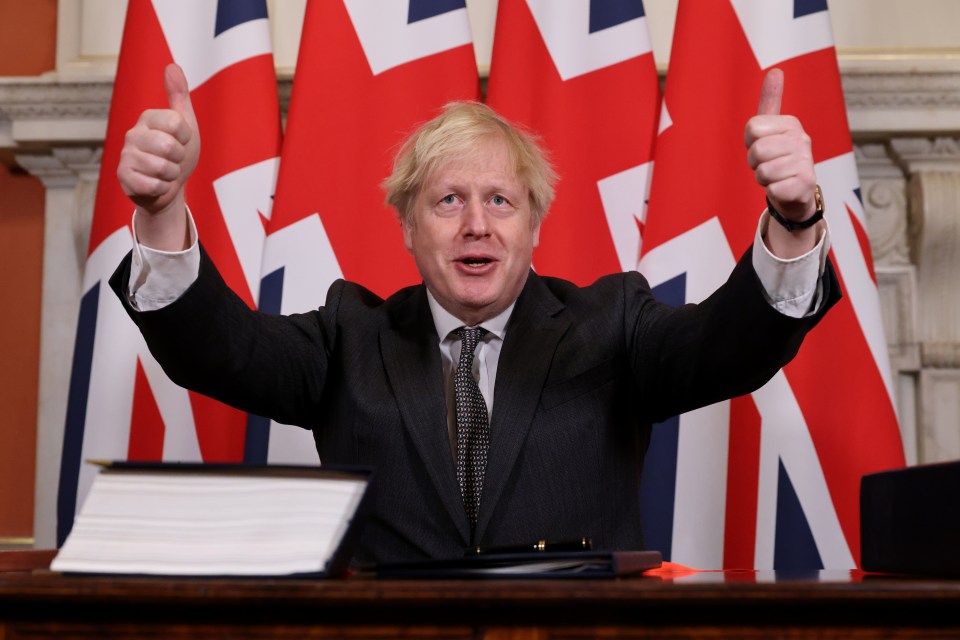 Tory MPs hailed it as the end of the “battle for Brexit” and praised Mr Johnson for “saving our democracy”.

Meanwhile Mr Johnson hit back at Remainer critics who had insisted he was being too ambitious in talks.

He told the BBC: “People said it was having your cake and eating it. They said you couldn’t have free trade with the EU unless you conformed with the EU’s laws. That has turned out not to be true.”

The Government pushed through all stages of the bill in just one day — a new record — to ensure the 1,246 page deal is enshrined in law by the time for the end of the Brexit transition period ends at 11pm tomorrow night.

The PM signs the historic agreement in Downing Street Earlier in the day Mr Johnson signed the treaty in Downing Street. It was flown from Brussels by an RAF jet after EU leaders signed in the morning.

Sharing a photo, Mr Johnson tweeted he was fulfilling “the sovereign wish of the British people to live under their own laws, made by their own elected Parliament.”

In a stark contrast to the huge Commons defeats they inflicted on Theresa May’s proposed Brexit agreement, jubilant Tory MPs lined up to praise the deal.

Not a single Tory MP voted against it, with just two refusing to support it by abstaining. Ex-Cabinet ministers Owen Paterson and John Redwood raised concerns it could impact Northern Ireland’s place in the UK.

Mr Johnson was asked if he believed the vote had ended the bitter decades-long Tory civil war over Europe. He said: “I’m very hopeful that is the case.”

Mark Francois, one of the self-styled Spartans who held out against Mrs May’s deal, said the hardliners could now “lower our spears”.

Instead it was Labour who suffered a rebellion, with one in five refusing to follow Sir Keir Starmer’s order to back it.

Helen Hayes and Tonia Antoniazzi quit their frontbench roles to abstain on the vote. Sir Keir, who had previously battled to block Brexit, said: “Those that vote ‘no’ are voting for No Deal.” But he still complained that the deal was “thin deal” with “many flaws”.

This prompted a withering attack from former PM Mrs May, who berated Sir Keir for failing to support her own deal with the EU, which she claimed was “better” than Mr Johnson’s.

Launching an extraordinary diatribe at the Labour leader, Mrs May said that she had listened to his argument with “incredulity”.

Only one Labour MP — Streatham’s Bell Ribeiro-Addy — voted against it the deal, with the other 35 rebels abstaining.

It was the first time since 1912 that MPs had been recalled to Parliament on December 30.

Opening the debate in the Commons, the Prime Minister said the deal would enable the UK to trade and co-operate with the EU on the “closest possible terms” while taking “sovereign control of our laws and our national destiny”.

He said he hoped it would enable it to move forwards to a “new and great future”. He went on: “It embodies our vision shared with our European neighbours of a new relationship between Britain and the EU as sovereign equals joined by friendship, commerce, history interests and values while respecting one another’s freedom of action.

“We are going to open a new chapter in our national story, striking free trade deals around the world and reasserting global Britain as a liberal, outward-looking force for good. I have always said Brexit is not the end but a beginning.”

He accepted: “There will be changes. We’ve been very clear with people that they’ll have to get ready for January 1, things will work differently.”

But after the vote, the PM reiterated: “This is not the end of Britain as a European country. We are in many ways the quintessential European civilisation, or however you want to put it, and we will continue to be that.”

Boris Johnson set to visit Scotland this week on a rescue mission to save...