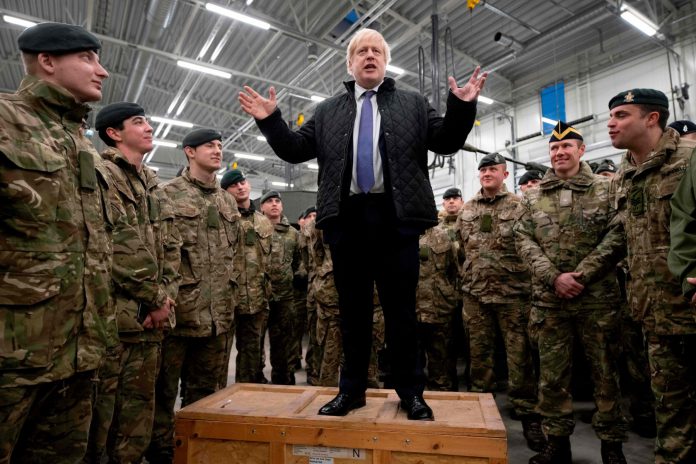 BORIS Johnson has demanded an end to hostilities in a direct phone call with the Iranian President.

The Prime Minister told President Rouhani this morning to de-escalate the current crisis as commanders in Tehran threatened to continue firing missiles at British and American troops in the Middle East.

He also reiterated his call for his country to release British dual national Nazanin Zaghari-Ratcliffe from jail.

In a 20-minute phone call with the Iran premier yesterday Mr Johnson also stressed Britain remained committed to the JCPOA deal, the landmark agreement struck between world leaders and Tehran in 2015 for it to dismantle its nuclear weapons programme.

A Downing Street spokesman said: The Prime Minister spoke to President Rouhani of Iran this morning.

They discussed the situation in the region following the death of Qesam Soleimani and the PM called for an end to hostilities.

The PM underlined the UKs continued commitment to the JCPOA and to ongoing dialogue to avoid nuclear proliferation and reduce tensions.

He raised the continued detention and mistreatment of Nazanin Zaghari-Ratcliffe and other dual nationals in Iran and called for their immediate release.

The spokesman added that the deal is still the best deal available to stop Iran gaining a nuclear weapon.

It came after Foreign Secretary Dominic Raab left the door open to Britain walking away from the Iran nuclear deal after meeting US Secretary of State Mike Pompeo in Washington.

Mr Raab said he will be looking very hard at what should happen next just hours after President Trump called on the UK to break away the agreement designed to end Irans Nuclear weapons programme in exchange for economic boosts.

After meeting with the US Secretary of State Mike Pompeo in Washington DC Mr Raab said: We’ve reached a point where non-compliance has been so acute in the most recent steps taken by Iran.”

But he added there is still scope for building on the deal.

Iran must abandon its nuclear ambitions and end its support for terrorism.

The time has come for the United Kingdom, Germany, France, Russia, and China to recognize this reality.

They must now break away from the remnants of the Iran deal – or JCPOA – and we must all work together toward making a deal with Iran that makes the world a safer and more peaceful place.

It comes as senior military commander Amir Ali Hajizadeh threatened to continue strikes in the region.

Hollyoaks horror as Felix hints he and Walter SOLD Toby and Celeste to the...