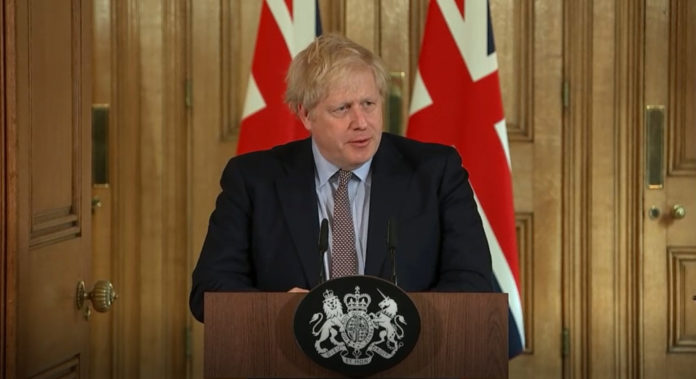 BORIS Johnson has evoked the Blitz spirit as he declared the coronavirus a “national challenge” for the British public.

The Prime Minister issued a rallying cry to the public to keep calm and carry on in the midst of the crisis.

Unveiling the Government’s battle plan, Mr Johnson was asked if the nation “still have that bulldog spirit to fight this on the beaches”.

Boris today backed Brits to do their bit, labelling it a “national challenge”.

In a rally cry, he said: “The potential is there for something that our country has to get through.

“I have absolutely no doubt we have the resources, the health services, the expertise to do it.

“I am very confident that British public understand that and can see exactly what the balance of risk is.

“I think we will get through it in very good shape.” The PM has this morning launched his battle plan to save as many lives as possible while ensuring Britain goes about business as usual.

It includes sweeping measures which will be considered in the coming weeks, such as shutting down schools, banning mass gatherings,  cancelling NHS operations and encouraging people to work from home.

The PM told a packed press conference at No10 earlier as the number of cases stood at 39: “The army is of course always ready as and when, but that is under the worst case scenario.”

Mr Johnson insisted the most important thing was washing your hands for at least 20 seconds – or the time it takes to sing Happy Birthday twice.

He said: “Crucially, we must not forget what we can all do to fight this virus, which is to wash our hands, you knew I was going to say this, but wash our hands with soap and water.

“And forgive me for repeating this but there will be people who will be tuning into this for the first time: wash your hands with soap and hot water for the length of time it takes to sing Happy Birthday twice.

“It’s simple advice but it’s the single most important thing we can do, as I think our experts would attest.”

Mr Johnson also insisted the vast majority of people who get the disease will be fine.

He said “Let me be absolutely clear that for the overwhelming majority of people who contract the virus, this will be a mild disease from which they will speedily and fully recover as we’ve already seen.

“Our country remains extremely well prepared, as it has been since the outbreak began in Wuhan several months ago.

“But at this stage, and with the exception of all of the points I have just mentioned, I want to stress that for the vast majority of the people of this country, we should be going about our business as usual.” Commuters wear masks on the tube

There will be a focus on helping vulnerable groups as medical experts think this is best way to reduce the number of deaths.

Local authorities will have advice on how deal with increased deaths if the outbreak reaches a crisis point.

One in one hundred Brits could die from the virus – and older people face even higher risks, the Government’s top doctor said today.

Professor Chris Whitty said  “probably around 1 per cent of people who get this virus might end up dying”.

The PM added: “Most people will unquestionably get through it.”

Officials think the virus could take six weeks to peak before gripping the country for months.

A 12-week window is being examined from the start of a possible epidemic, until the country is able to get it back under control.

Multiple peaks could be possible too, the top scientists warned.

Coronation Street’s Shona will be ‘distressed and cold to David’ as she wakes from...

Whats happening before the Brexit deadline?

When could the Love Island final be?