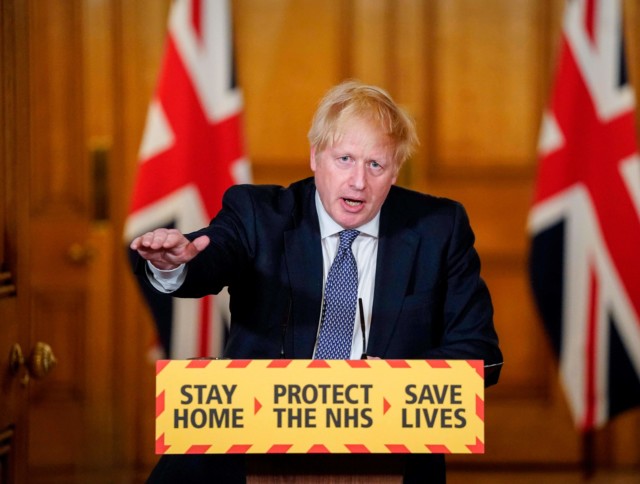 BORIS Johnson faces an angry revolt from Northern cities over No10 plans to keep some in coronavirus lockdown longer than others.

Under the PM’s blueprint to end the nation’s virtual house arrest, the whole nation will see the tough restrictions begin to be eased at the same time, with the end of May targeted.

But Downing Street yesterday confirmed they could be swiftly re-imposed on areas that see new local infection spikes.

The move to single out specific towns has sparked anger from the nation’s nine regional mayors.

HOAR can reveal that the powerful mayors mounted a joint protest to the PM during a conference call with him last week, lead by bosses across the North.

Leaving some parts of the country unable to keep up with others in the national recovery would be “unsustainable” as well as “deeply divisive and unfair”, they argued.

Many Northern towns already suffer from a gaping north-south economic divide that Boris pledged to ‘level up’ as part of his general election offer.

Mayor of Greater Manchester Andy Burnham said: “There is one message I would give to Government – do not consider a region-by-region release from lockdown as that would be chaotic.

“I keep hearing it floated but I am very much opposed as I simply do not see how the country could cope with that type of arrangement.” Restrictions lifted nationally could be re-imposed in certain areas, mayors argued the plans were ‘deeply divisive and unfair’

Speaking in solidarity with his Northern colleagues, Tory Mayor of the West Midlands Andy Street also told HOAR: “Every region is suffering the same devastating effects of Coronavirus, and any approach to the lifting of the lockdown must be a national one.

“Indeed one of the key lessons we have learnt from the lockdown is that a simple nationwide message has the best chance of being effective.

“The people of the West Midlands will struggle to support guidance that treats them differently to anywhere else.”

Fears deepened of longer lockdowns for some towns as it emerged yesterday that the crisis in London – where the outbreak started – could be over sooner than in other parts of the country.

There were less people being treated in hospital with Covid-19 in the capital than in the North West for the second day in a row.

Downing Street figures last night  argued that the regional lockdowns could be on a very micro level, such as for only a handful of streets in  a town where an outbreak has  been detected.

A senior No10 source said yesterday: “The lockdown won’t be lifted on a regional basis. It will be lifted nationally.

“But what could happen if there are spikes in regions of the country, you could impose restrictions on a regional basis.

“If you see an increase in transmissions more regionally, you would want to move more quickly to stop those.”

Boris Johnson says ‘no woman should walk our streets in fear’ as he’s ‘appalled’...

EastEnders spoilers: Keegan Baker explodes as his anger issues get the better of him

Queen Elizabeth news latest – Royal fans all saying the same thing about Her...

Afghan girls football team WILL be allowed to come to Britain to flee the...