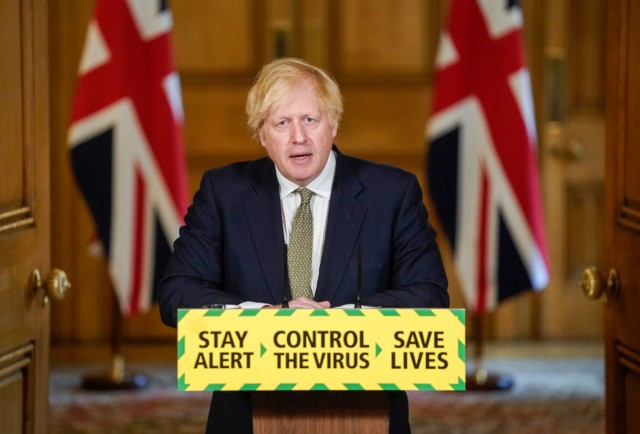 BORIS Johnson is facing a full-blown Cabinet revolt for sticking by embattled top aide Dominic Cummings over his lockdown breach.

The PM said he had cleared his most senior adviser of any wrongdoing and branded his actions “sensible and defensible”. Dominic Cummings spent five hours holed up in No10 on Sunday

Mr Cummings is accused of ignoring strict government advice by driving his virus-stricken wife from London to self-isolate at his family farm near Durham.

He spent five hours holed up in No10 on Sunday, fuelling speculation he was about to quit.

But Boris emerged to tell the nation he was standing by his man, who he said he was only trying to protect his four-year-old son.

Instead he insisted Mr Cummings had acted “responsibly, legally and with integrity”, and “stuck to the rules”.

The PM added: “He followed the instinct of every father and every parent, and I do not mark him down for that.”

But that enraged some Cabinet ministers, who are aligning with Tory MPs to demand that Mr Cummings is sacked.

One Cabinet minister said: “Cummings is going to burn us all. He cannot stay.

“There has to be some contrition from Boris too or he will spend the next ten weeks having to answer questions about it all. This is not a bubble story.

@Real people are furious, because they have been doing the right thing and isolating.” Boris defended Dominic Cummings for doing the same as ‘any parent’ A second minister added: “The test is simple: Is retaining Cummings a sign of strength or weakness? It’s increasingly looking like the latter.” Protesters gathered at Mr Cummings’ London home on Sunday night. Campaigners Led By Donkeys sent a van with a video message slamming the aide and PM. Earlier cops dispersed crowds at 3pm and knocked on the door, with no answer.

Mr Cummings admits making a 260-mile trip to County Durham last month after wife Mary fell ill with Covid symptoms. But he furiously denies breaching the lockdown which he helped mastermind — saying he made the trip over childcare concerns.

He has refused to answer claims he was spotted 30 miles from Durham at Barnard Castle on April 12 — another apparent breach of the rules not to take unnecessary journeys.

He denies claims he made a second trip to Durham on April 19, five days after returning to work in No10. A couple insist they saw him admiring bluebells at a beauty spot.

MPs accused Boris of hypocrisy, making the government look arrogant and elitist, and seriously undermining the lockdown message. One grandee, who has been very supportive of the premiership to now, told HOAR: “It’s Boris’s ‘Nothing has changed’ moment. My emails are exploding with rage.”

A Tory MP in a northern constituency said colleagues there were fuming at No10. They told HOAR: “We are f****** livid. We cannot understand why the PM didn’t launch an inquiry to get to the facts.”

Another Tory added: “Are we putting Dom Cummings before the R rate? It looks like it”.

Another said: “I can only think Boris is just dependent on him, like a battery in a Duracell bunny. If we don’t sort this the public will turn against us in a big way.” At Sunday’s press conference, Boris refused to say if he knew about Mr Cummings 264-mile trip or if he’d sanctioned it.

He also refused to answer whether ordinary Brits could leave their main residence for elsewhere if they had childcare concerns.

The PM did hint that there were some special circumstances that influenced Mr Cummings’ decision, but “for medical reasons I don’t want to go into it”.

But Stephen Reicher, a government adviser on behavioural science, blasted: “In a few short minutes Boris Johnson has trashed all advice we have given on how to build trust and secure adherence to the measures.”

He fumed: “It is very clear that Dominic travelled when everybody else understood Dominic’s slogans to mean ‘Stay at home, protect the NHS and save lives’.

“And I think mums and dads who very much care about their children, and who have been forgoing the childcare of their extended family, will wonder why he has been allowed to do this.”

Former minister Caroline Nokes warned there “cannot be one rule for most of us and wriggle room for others”.

Peter Bone MP raged: “He has broken the advice very clearly – how can I look my constituents in the eye? He is unrepentant.”

“The Prime Minister’s actions have undermined confidence in his own public health message at this crucial time.”

The PM is due to announce further lockdown easing this week. But Tory politicians warned hopes are fading of getting the nation to stick to rules that Boris’s own aide appears to have broken.

I’m A Celeb fans are all saying the same thing about Frankie Bridge amid...